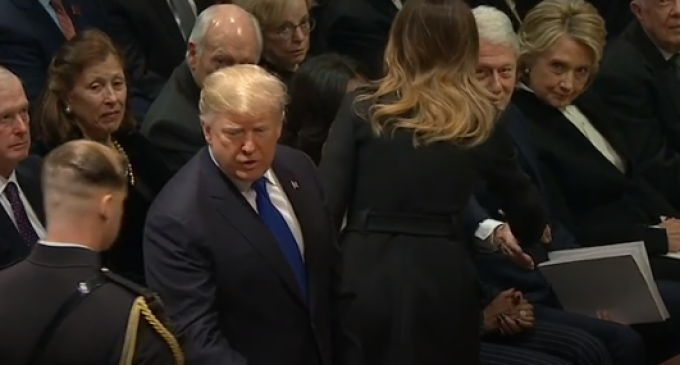 The arrival of President Donald Trump and his wife Melania at the Washington National Cathedral in Washington DC for George H.W. Bush funeral completely altered the mood among the other attendees in the front row, according to Fox News anchor Chris Wallace.

“I have to say I was struck when President Trump and Melania Trump came to the front row that it was as if a chill had descended on that front row,” Wallace said. “You had seen a lot of chatty talk between the Clintons and the Obamas, the Carters. But when Donald Trump sat down, the greeting that he was given by Barack Obama and Michelle Obama was about as cool as it could have been,” he continued.

“At that point they all stopped talking to each other,” Wallace said, citing the “ill feelings” between the President and others sitting together in front row.

As Melania was entering the pew she and Bill Clinton shook hands while Hillary refused to extend hers, only throwing a hateful smile Melania's way. President Trump exchanged greetings with Barack and Michelle Obama but not with the Clintons.