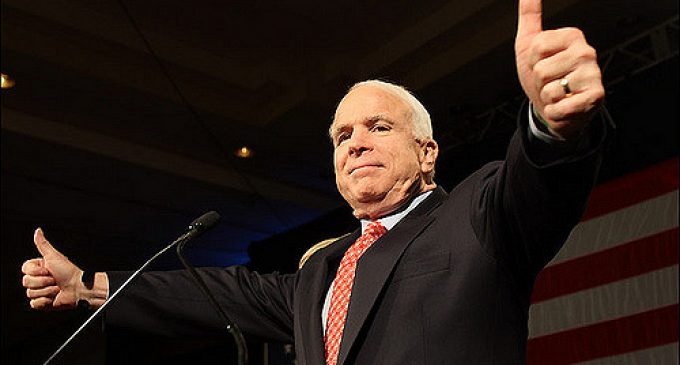 It’s not exactly clear what precisely was used for anesthesia during John McCain’s surgery, but based on his age, it could have been whiskey…copious amounts of Maker’s Mark.  However, just assuming that he has a better healthcare package than we do as lowly serfs who make mud patties in the fields, it’s possible he was administered something a bit more…21st century?

Whatever it happened to have been, it has done something to radically alter the personality of “The Maverick,” because this Republican has moved off the reservation and into the Jackass Party commune, smoking immeasurable quantities of unnamable plants, imbibing unfiltered Swamp water, and writing manifestoes that make the Unabomber look like John Forbes Nash.

Over the past few days since McCain’s return to Congress to cheers from his peers, he has managed to marginalize the American people (including his constituents) to the point where they no longer matter, nor does he care to answer their questioning stares of confusion.  This is his final term and he has made it crystal clear that he intends to finally outright defy his supporters and the Republican Party voters by leaning as Left as he possibly can.

This is most likely an attempt at currying the favor of the Fake News Industrial Complex (FNIC) in order to secure a cherry position at MSNBC or CNN post-Congress, with an emphasis on ensuring that his daughter is set up in a very alluring way to possibly run for his vacancy.  (Psst:  Never gonna happen!)

What is damnably clear is that John McCain is no longer a RINO.  He has graduated to outright traitor by virtue of his hostile and belligerent posture toward the White House in deep-sixing the healthcare reform.  This thumb in the eye of Trump and his administration was in full view of the rest of America who were shown his true colors.  But there’s more!

Now, the odd (and some would say, insane) behavior that he’s exhibiting has seeped over into his delusions of self-importance.  He has unleashed his inner Jimmy Carter and decided that it is 2008 and he defeated Barack Hussein Obama.  This bad sci-fi movie playing out in McCain’s head has catapulted him into the Oval Office and he now believes HE is the Commander-In-Chief!

Turn to the following page to read his comments on what he’s going to be doing next in an effort to call the shots of our military abroad!