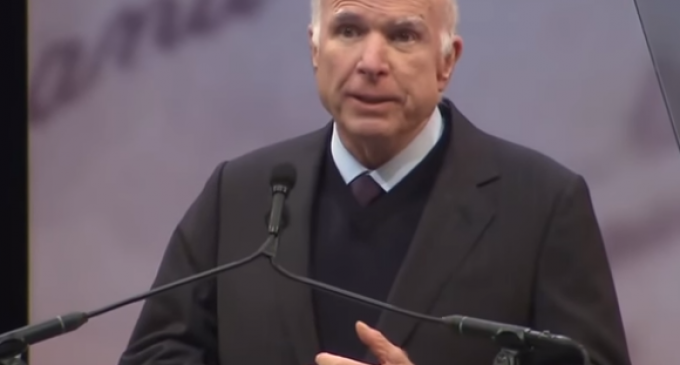 John McCain has driven home one point over all others that has been a tipping point on whether or not he would be reelected (which he won't be, provided that he doesn't pay off half the voters in Arizona).  He has made it necessary for Donald J. Trump to hire a wine-taster on his staff because McCain has made it abundantly clear that Trump needs to watch his back, his front, his flanks and his food.  If I were the president right now, I might not even trust the family dog!

Last night, McCain rushed off from his “busy” senator work schedule of saying “no” to every Trump proposal in order to go to Philadelphia to accept an award from the Leftist National Constitution Center.  The Liberty Medal is handed out by these puffed-up Liberals to the person with the strongest opinions against a Republican president, be they Black, White or Obama, or be they Leftist or More Left (like McCain).

In his acceptance speech, for which Joe Biden was present to clap him heartily on the back and pump a fist for his Liberal friend who turned out to be a bigger obstacle to Donald Trump than even Hillary Clinton, Judas McCain took the opportunity to once again bash the president and, surprise, surprise, the Americans who voted for him!

Turn to the next page for more on his comments about how we're all so “unpatriotic!”