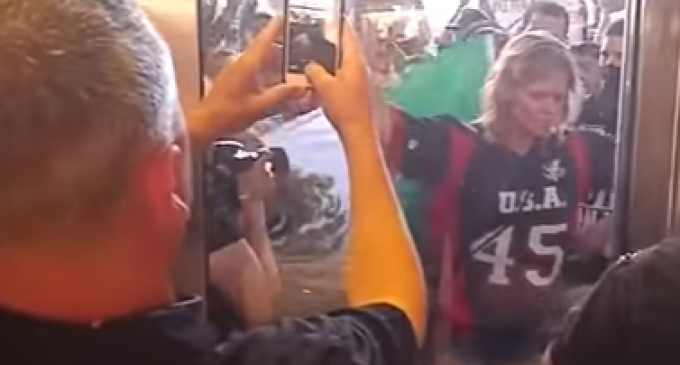 The agitators were most likely Soros paid protestors, who have instigated violence at many of the Trump rallies throughout the nation.  The media, probably also paid by Soros, did not report what actually happened, (shocking), but justified the physical attacks.

Much like the blaming a rape victim for her attack, Sara Murray, a CNN reporter, said the woman who was attacked by raging Mexican-flag waving men, provoked the situation.  She claimed this woman “taunted” the mob, which resulted in a justified pelting of bottles, eggs, and spit.  Video footage proves otherwise, but progressive ideology clouds the judgement of leftist media types.

San Jose, a city where Hispanics outnumber all other ethnic groups and 69.450% of the population are registered Democrats, will certainly protest against Trump and his plan to make America great again.  The media, however, blames the violent outburst on Trump and not those actually throwing the stones.

The Mayor of San Jose, Sam Liccardo, a staunch Hillary supporter, blamed Trump for the hostile protestors, saying that, “At some point Donald Trump needs to take responsibility for the irresponsible behavior of his campaign.”

WHAT?  The men behaving badly toward a Trump supporter are off the hook for the violent behavior, because it is Trump's responsibility?  Victimology 101, sponsored in part by Sam Liccardo and the left-leaning media that “legitimizes the mayhem” to quote Paul Joseph Watson @PrisonPlanet.

Get more information about the woman who was attacked and view the videos on the next page.