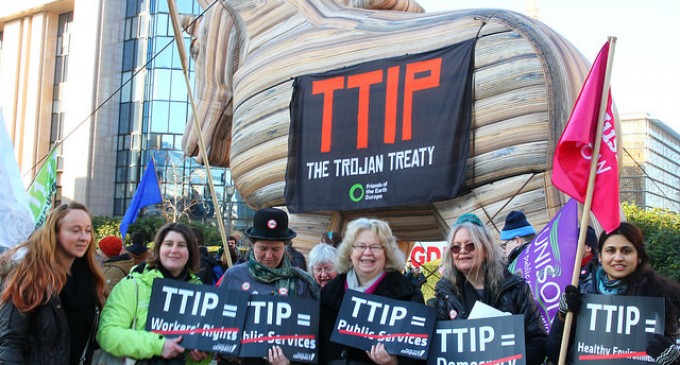 One thing that can be taken away from the Donald Trump Republican primary victory and the strength of Bernie Sanders in Democrat primary battle is that the public has almost no trust in the political elites to do the right thing and to protect their interests. Elected politicians must keep their constituents happy and convinced that they are representing them or they will pay a price at the voting booth coming election day. But by huge margins the American people are indicating that they do not believe or trust their elected representatives, and they are suspicious of any actions by any officials that are less than forthcoming, hence the popularity of outsiders Trump and Sanders.

And that is why there has been such deep suspicion in the Transatlantic Trade and Investment Partnership (TTIP), which include trade negotiations that the public is kept completely in the dark about. Wikileaks, whistleblower Edward Snowden, and a host of other sources have filled the gap to provide inside information that shows deals such as TTIP are not in our best interest and should be objected to before it becomes established law and policy without any public input. The politicians hate this transparency and prefer to negotiate in secret and then to spring the new policy on the public when there is no viable recourse left.

Now a new leak of hundreds of pages has been released from the TTIP negotiations, and it is from the far left group Greenpeace! Read more on page 2: