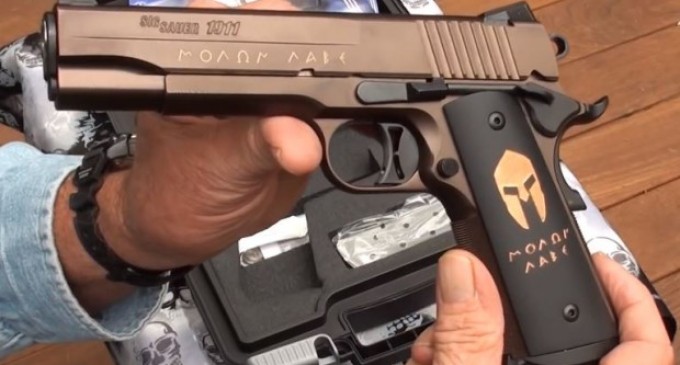 Maryland is set to target 110,000 citizens with gun confiscation under a new law that would link the state’s gun registry with its criminal database – and they have new troopers set to be hired to enforce door to door visits of these gun owners.

Confiscate guns from felons one day with their new ‘confiscation task force', who's it going to be the next?

Authorities in Maryland are set to target 110,000 citizens with gun confiscation under a new law that would link the state’s gun registry with its criminal database, with new troopers set to be hired to enforce door to door visits of illegal gun owners.

Maryland State Police complain that there is no way for them to identify gun owners who have been convicted of felonies, meaning they can’t check if weapons have been relinquished in accordance with state law.

New legislation being considered by the Maryland House of Delegates would allow police to run checks of the state’s gun registry against its criminal database at least twice a year at a cost of $300,000 dollars to create the new system.

“State Police estimate that if they linked the databases, they would find 10 percent of registered gun owners — about 110,000 people — would be disqualified. They estimate a rate of 1 percent each year thereafter,” reports the Associated Press, adding that “seven new full-time troopers to investigate findings from the new database,” would be hired, “with a cost of more than $1 million a year for salaries and equipment.”

In other words, more armed police would be needed to conduct dangerous door to door gun confiscations of the thousands of people that would be snagged under the new law.

“This smacks of a police state mentality,” said Maryland resident Ronald Smith in written testimony before a hearing on Tuesday.

While the law is ostensibly aimed at disarming criminals, we have seen a steady expansion of reasons that are being applied to bar Americans from owning firearms. The law also creates a chilling effect on the second amendment by implying that gun owners are all guilty until proven innocent.

Last year we reported on how US Navy Veteran David A Schmecker had his guns confiscated by police after a forced “psychiatric evaluation” despite him having no criminal or psychiatric history.

In August 2012, we reported on how a veteran in Ohio had his guns taken because he was adjudged to be mentally incompetent, despite the fact that his previous VA psychiatric evaluations were all clear, he was not on medication, and he had no criminal record.

In February 2012, David Sarti, one of the stars of National Geographic’s Doomsday Preppers show, visited his doctor complaining of chest pains, only to have the doctor later commit him to a psychiatric ward and alert authorities, before Sarti was declared “mentally defective” and put on an FBI list that stripped him of his second amendment rights.

Maryland’s preparations for gun confiscation arrive on the back of a similar showdown in Connecticut, where a vast majority of residents refused to register their assault rifles and high capacity magazines in accordance with a new law that took effect on January 1. Gun groups are now challenging authorities to either proceed with mass gun confiscation or repeal the law in full.