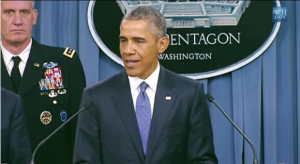 Martial law.  The concept conjures up total control of the population by military forces in response to some overwhelming crisis.   Civil liberties go out the window in the name of “national security.”  Movement is restricted as are routine daily activities.  Elections are suspended.  Government officials rule by decree.

As the ultimate tactic for population control, any hint that martial law might be on the horizon needs to be met with vigilance and deep concern by the people.

Unfortunately, the Obama administration has dropped those very hints. Dr. Ben Carson and even the Washington Times has warned us about the very real potential that Barack Obama will attempt to remain in office with a declaration of martial law.

As you are probably well aware, the Obama administration would like nothing more than to place the United States under Martial Law.

Once that is accomplished, the country and people would be locked down and kept under control on the pretext of continuing with the government and/or maintaining the national security of the U.S.

Of course, they would deny any desire to establish martial law.  Obviously they would have to if subterfuge is to be employed in creating an event necessary to establish it.

Once it is accepted that the central government might orchestrate events to seize power using martial law, vigilance demands an examination of possible scenarios under which this might occur.

That examination of five such scenarios begins on page three.