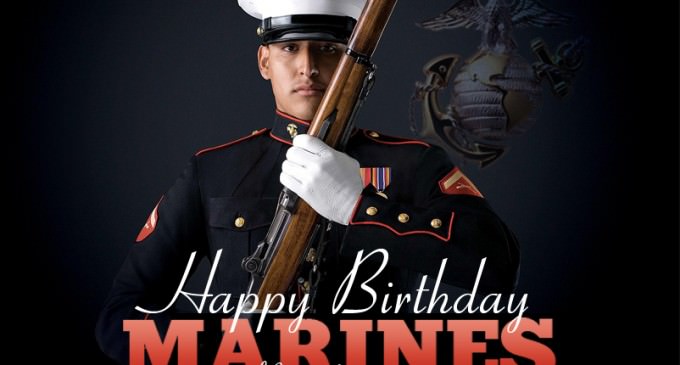 Today marks the 240th anniversary of the formation of the Marines. From Tripoli, to Belleau Wood, to Normandy, and the corners of Afghanistan and Iraq, the United States Marines have forwarded the cause of freedom and democracy and steadfastly protected the citizens and ideals of this country and others with determination and indomitability.

Many of us know or have known Marines, and even a select few have earned the honor of serving as a marine. Today marks the beginning of a brave and noble tradition, and to celebrate it Marine Commandant Lt. General Robert Neller  ands the Sgt. Major of the Marine Corps Ronald L. Green delivered a birthday message to those serving and have served in the Marine Corps. Marine Commandant Lt. General Robert Neller  ands the Sgt. Major of the Marine Corps Ronald L. Green have delivered a message to the Marine Corps to celebrate and mark the 240th anniversary of the founding of the U.S. Marines.

If you know someone who has served in the Marines, consider buying them a beer or two and give them a handshake.

If you are a Marine, the country is in an eternal debt that can only seem belittled by gratitude.

There have never been words to sufficiently thank Marine service members, but today is a fine day to encourage everyone to tell their Congressmen to reform Veterans Affairs services and to demand the proper treatment of veteran Marines. The only way to appropriately thank a serviceman or servicewoman is to guarantee a smooth transition into civilian life. They have more than earned it.