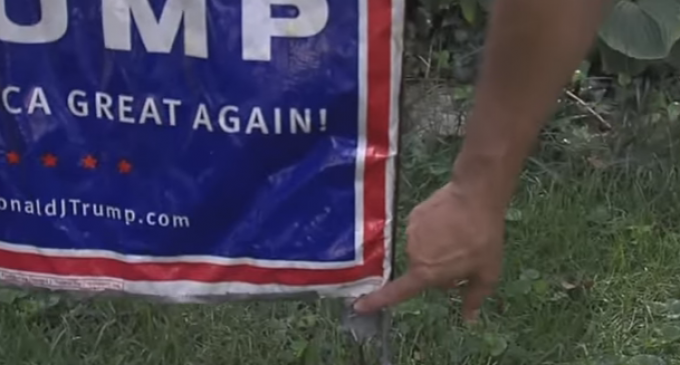 For Conservatives there really is nothing more satisfying then watching karma catch up with the obnoxious members of the liberal left. They gloat and spew their opinions all over the Internet, college campuses and any political event that might be happening at the time. And despite how much they swear to be right and know everything, they seldom offer any evidence backing up any of their claims. As long as they end their statement by calling somebody a racist, their followers drink the kool-aid and cheer blindly.

To say that our current presidential campaigns have been heated would be an understatement. Hillary supporters have shown up at Trump rallies, protesting, burning American flags and in some cases leaving Trump supporters bloodied and bruised. Meanwhile, Conservative protestors at Hillary rallies have behaved, well, like civilized people. Don't the left claim to be the more tolerant ones? Apparently not, which is evidenced by a would be sign thief this week, who found out the hard way that Conservatives won't back down . . . and neither does karma.