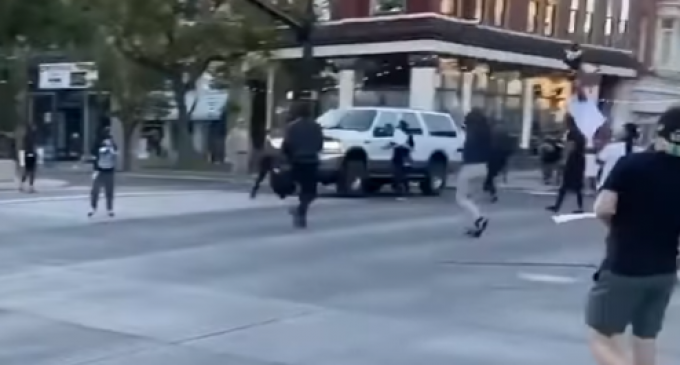 A citywide manhunt is underway in Provo, Utah for the protestor who shot into the SUV of a 60-year-old man, sending him into surgery.

Roughly 100 people took to the streets and claimed to be conducting a peaceful protest until multiple cars tried to ram into them.

“In the last hour there have been three to four cars that have been trying to run into the groups of people that are congregating at the main intersections in Provo,” Betsy Croft, one of the protesters, said. “This is a peaceful protest so that kind of action is unwarranted and clearly an attempt to be violent.”

Footage shows a white Ford Excursion pushing through the protesters who were attempting to gather in front of it. As the driver picks up speed and is nearly free of the group, a masked man dressed in black-bloc attire is seen firing a handgun into the SUV.

Go to page two for more details plus footage.