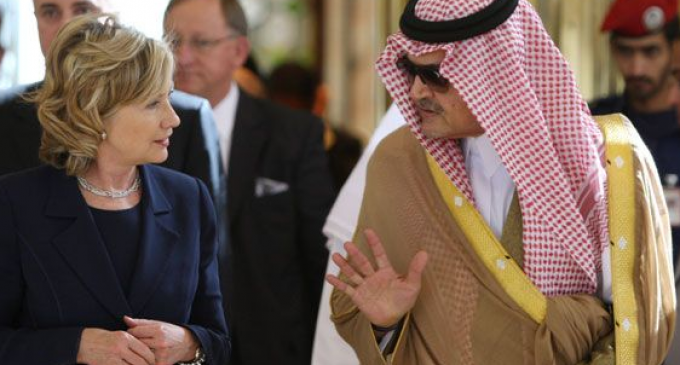 By now, most people are familiar with the controversies surrounding the Clinton Foundation and the State Department under Hillary Clinton's leadership.  During her reign as secretary of state, Hillary Clinton's State Department approved $165 billion worth of arms sales to 20 foreign nations — countries that just so happened to have donated a lot of money to Bill and Hillary's Clinton Foundation.

The bulk of the controversy surrounds deals with several Middle Eastern countries — Algeria, Kuwait, the United Arab Emirates, Qatar, Oman, and Saudi Arabia.  Clinton approved these deals despite privately expressing concern in 2009 that many of the nations were not doing their parts in combating terror, and that elements within some of those governments were even financing or supporting terrorists.

The biggest deal went to Saudi Arabia and included $29 billion in state-of-the-art fighter jets to our Middle Eastern “ally.”  The government of Saudi Arabia and various Saudi groups made large donations to the Clinton Foundation on several occasions, and now another link between the oil-rich kingdom and Hillary Clinton has emerged.

To read about how Hillary's major campaign funder, Anthony Podesta, is currently on the payroll of the Saudi government, continue reading on the next page: