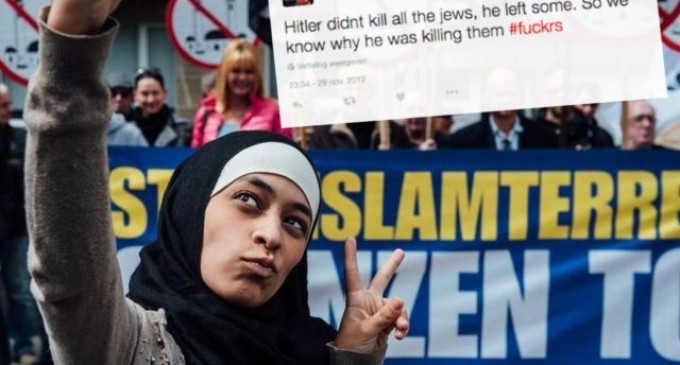 Liberals and their allies in the mainstream media have long pushed the agenda that the vast majority of Muslims are peaceful people and that groups such as ISIS, Al Qaeda, Al Shabab, and Boko Haram really have nothing to do with Islam.  The left expects everyone to believe that it is just a giant coincidence that every single member of these terrorist organizations just happens to be Muslim.  Others on the left have attempted to tell us that these terrorists aren't even Muslim at all.  They only believe that they are Muslims.  Apparently the people working at the Huffington Post know what makes someone a Muslim and what does not.

Of course, the great irony behind the left's willful ignorance of Muslim extremism is that they have no problem attributing the words or actions of one or two Christian extremists to all 2.2 billion Christians in the world.

Now, the mainstream media is feeling a bit stupid after they held up a young Muslim girl as a hero after she posed for a selfie making a peace sign at an anti-Islam rally in Belgium.  It turns out that Zakia Belkhiri doesn't fit the bill of a peaceful Muslim at all.  Although Miss Belkhiri has now deleted many of her social media accounts, she cannot delete the screen shots other people took when she sang — or tweeted — Hitler's praises back in 2012.  To read what Belkhiri had to say about why Hitler left some Jews behind, continue reading on the next page: