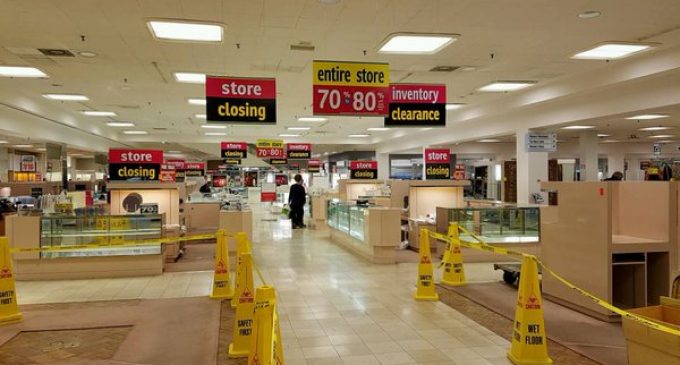 Once again, the lie about a recovered economy is proved wrong as Macy's is forced to close 100 more stores.  Profits are plummeting and sales are such that over the next year the department store chain will reduce it's number of brick and mortar stores in order to meet the demands of online shoppers.

Macy’s also had to “shutter many locations due to a host of economic conditions… and one serious mistake. The retail legend cited low levels of spending, geo-economic blather and even blamed global warming. There was no mention of the impact their 10 million dollar CEO Jerry Lundgren had on sucking  up valuable dollars but the normal excuse of “I am paid by a board” was surely thrown around the few times he had to excuse himself this year.

The closures are part of a strategic plan to hopefully reach a place of “sustained growth in the future”.  Other strategies include the improvement of online shopping and ordering, bringing more “brand shops” into the stores and “hosting in-store events” to create more traffic.

Macy's is just another victim of Obama's economics.  Earlier, another high-end retailer was also forced to close.

Ralph Lauren is the next to fall in line, that is the unemployment and closure line, with more than 1,000 jobs being cut and 50 stores shutting their doors.  Much like Macys, Walmart, Sears and a list of  “major U.S. retailers that (sic) have announced the closing of more than 6,000 stores from coast to coast”, Ralph Lauren can no longer operate in the same manner and hope to ever be profitable in this Obamanemic economy.

As the dismal, jobless Obama economy continues, clothing retailer Ralph Lauren has announced a major scaling back of its U.S. operations, with the loss of one thousand jobs and the closure of 50 stores.

The massive closures can be read about on the following page.