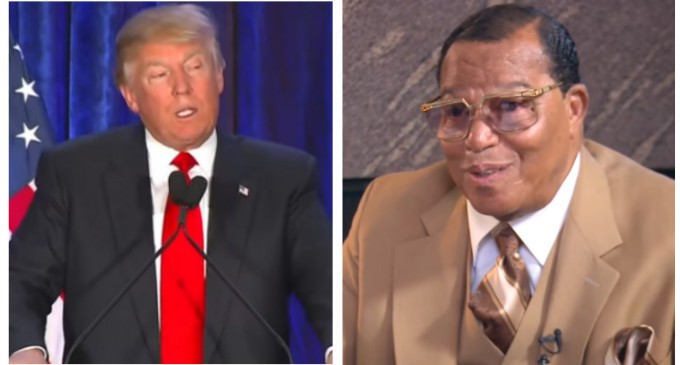 Donald Trump has earned praise from someone he probably would rather have not.

Surprising people on both the left and the right, Nation of Islam leader Louis Farrakhan heaped praise on the GOP frontrunner for not taking money from what he characterized as Jewish special interests. The move, according to the radical minister, signals that Trump can't be bought out by others.

“[Trump] is the only member who has stood in front of [the] Jewish community and said ‘I don't want your money,” Farrakhan claimed during a sermon on Monday. He clarified that he was not endorsing Trump, but admitted he agreed with him on a number of issues.

Farrakhan's statement that Trump is some kind of enemy to the Jewish people will likely come as a surprise to the GOP frontrunner, who has on several occasions expressed strong support for Israel and boasted of his personal and business ties to the country.

Long considered a pariah even by radical leftists, Farrakhan has made a name for himself as one of the most incendiary voices in American politics since the 1970's. An unrepentant anti-Semite, the Nation of Islam leader also believes that 9/11 was a false flag orchestrated by the Bush administration to convince Americans to support wars in the Middle East. He has previously criticized Trump, even charging that the Republican candidate would destroy the nation if he became president:

‘Now, they got into the Bush administration and on 9/11 the Twin Towers went down. [Former President George W. Bush] and those devils, those Satans around him. They plotted 9/11. Ain’t no Muslim took control of that plane.'

‘If Donald Trump becomes president, he will take America into the abyss of Hell,' he said on his Facebook page on Jan. 1.

‘[Trump] is exacerbating the race situation in America. Mr. Trump is tearing away the skin of the onion of white civility, and the more he pulls the skin of that onion back, he’s beginning to show something in the character of whites that follow him, that they don’t care what he says,' he added.”