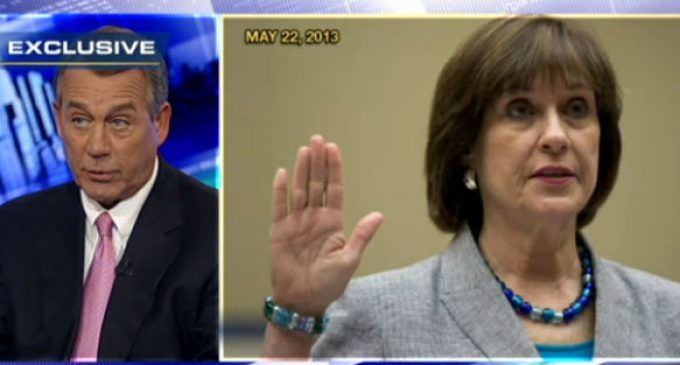 In an interview about possible criminal charges in the IRS targeting scandal House Speaker John Boehner told Fox News’ Megyn Kelly Monday “I don't care who should be fired. I want to know who is going to jail.”

Share this article if you think Lerner should face jail time for targeting conservatives.

Boehner confirmed to Fox News’ Megyn Kelly Monday that lawmakers plan to press the Justice Department to consider a criminal case against ex-IRS official Lois Lerner for “misleading the Congress.”

Boehner also said if Lerner does not cooperate soon by providing information on the IRS targeting scandal, the House would hold her in contempt of Congress.

“Somebody at the IRS violated the law,” Boehner said on “The Kelly File.”

“Whether it was Lois Lerner or not, we’ll find out.”

A meeting of the House Oversight and Government Reform Committee to consider contempt is set for Thursday.

But before that, the House Ways and Means Committee will meet Wednesday to prepare a letter to the Justice Department citing possible criminal activity by Lerner.Formal notice was given Monday night by the committee to Attorney General Eric Holder about the referral for possible criminal prosecution of Lerner “based on evidence the Committee has uncovered in the course of investigation of IRS abuses.”

The accusations generally relate to the scandal over the agency's practice of singling out conservative groups seeking non-profit status for extra scrutiny.

Boehner told Kelly that any criminal case against Lerner would be for “misleading the Congress.”