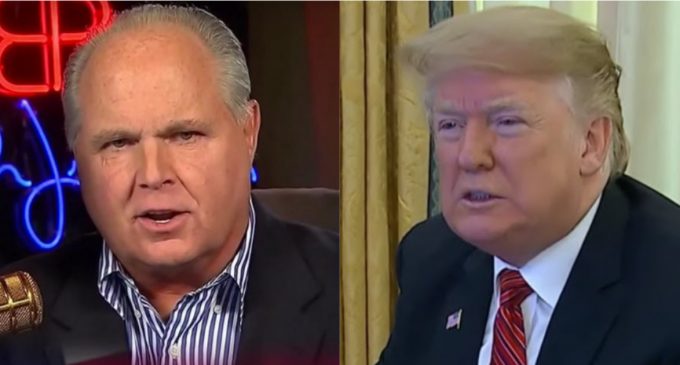 On Monday's edition of The Rush Limbaugh Show, the conservative host urged President Trump to remain steadfast in his position demanding that Congress approve funding for a border wall with Mexico.

At the beginning of his program, Rush said that the Democrats owned the shutdown but have no desire to resolve the impasse because they believe that in three months they will have fractured President Trump's base due to his decision to pull out of Syria.

“The shutdown is obviously a top priority subject,” Limbaugh said at the beginning of his Monday show. “I just need to reiterate some things about it. We’re hearing that it’s not going to be resolved until the new year. The Democrats have no incentive, really, to solve this until they take control of the House of Representatives on, I think, January 3. But I want the president to hold firm on this.”

“This shutdown is one that the Democrats own,” he continued. “This would be very easy to resolve, and they don’t want to do it. They don’t want to do it, because I’ll tell you, if you look at the media today, the Washington Post today, CNN, folks, they have Trump gone in three months. They think this is going to lead me to the next subject we’re going to dissect here today. They believe in three months they will have fractured Trump’s base, i.e., you. They think they will have split Trump’s base.”