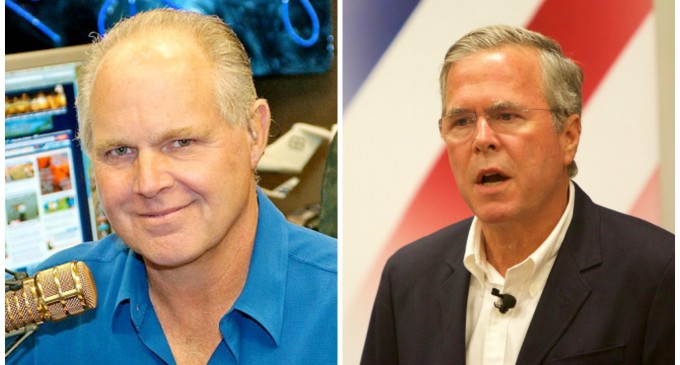 In spite of Jeb Bush's abysmal performance and recent departure from the Republican primaries, at least one noteworthy conservative believes the party establishment is going to try and make him the nominee at the last minute.

Speaking on his nationally-syndicated radio show, Rush Limbaugh offered his reasons why he believes Bush will be the establishment's pick if it manages to keep Donald Trump and Ted Cruz from winning. Such a development would be shocking for many reasons, not least of all Bush's suspension of his campaign.

Instead, he thinks that the GOP establishment's strategy is to keep both Trump and Cruz from getting 1237 delegates, meaning no single candidate will have a clear plurality of delegates. At this point, Limbaugh believes they will reinsert Jeb into the running and he will cruise to an easy victory.

Such an outcome will likely plunge the GOP into even further infighting, as rank-and-file conservatives revolt against the establishment's underhanded attempt to force another Bush on them. In fact, the possibility of Jeb being nominated might energize voters to turn out en masse for Trump and Cruz in order to ensure he stays out:

“Limbaugh noted that in 1976, the Republican establishment denied Ronald Reagan. ‘So I’m just telling you, if they succeed in this, if they succeed in denying Trump or Cruz 1237 delegates by the end of the primary process I’m here to tell you in Jeb Bush is going to be the nominee. That’s what they’re going to do, that’s what I’ve always wanted and Jeb himself said to back on December 14th of 2014 when this whole process started Jeb said that his strategy was to lose the primaries and win the nomination.'

‘And it may yet happen,' Limbaugh suggested. ‘If not Jeb, they’ll go Romney. But if Kasich thinks it’s going to be him, and I don’t doubt that he does, that’s why he wants to win Ohio and stay in. and now there’s talk that Rubio will stay in even if he loses Florida.  And Rubio and Kasich have both said that they are rethinking their pledge to support the nominee. It came as recently as a week ago. Isn’t that why Trump has supporters in the first place because so many Republicans make promises and then break them? So the fur is flying and the establishment is making one last gasp here. Well it won’t be the last'”