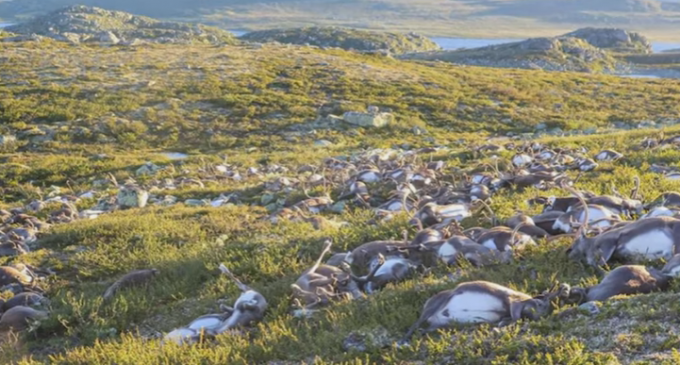 Norway, a place not “particularly prone to severe lightning”, had a thunderstorm so powerful that a herd of more than 300 wild reindeer were killed by a lightning strike in a Norwegian national park.

The Hardangervidda grasslands are the “largest high mountain plateau in Northern Europe”, spanning 3,088 square miles.  This vast area is home to 10,000 to 11,000 reindeer.  When the storm came through lost Friday, the lightening most likely struck a tightly packed herd killing hundreds, 70 of which were calves, according to the Norwegian Environment Agency.

NASA's Global Hydrology Research Center has data that southern Norway gets less than one lighting strike per square kilometer.

Scientist, Steve Goodman, with the National Oceanographic and Atmospheric Administration’s Satellite Service said that “…lightning can spread for hundreds and hundreds of meters, for sure” thus resulting in the mass death of the wild reindeer.