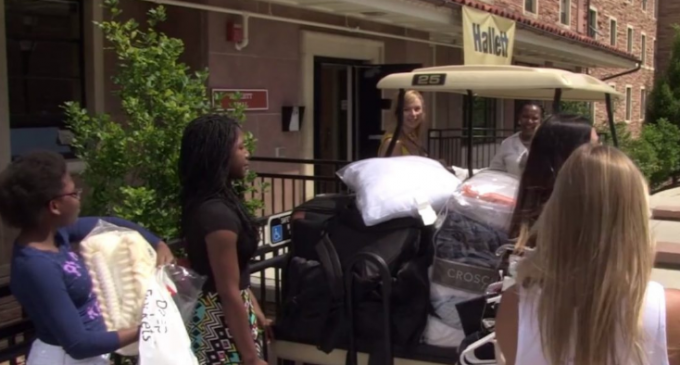 Colorado University – Boulder has not been favorably look upon as of late.  Not too far removed from today, the university was wrapped up in a scandal involving the now-famous spy program where students were encouraged to skulk about the vaunted halls and avenues of the campus with golf pencil and mini-pad poised, ready to record any number of terribly upsetting language or gestures by other students that would offend them.  These grievances are then brought to the attention of the school officials who could then begin   public execution proceedings in the campus square.

The school's committee has once again come up with a brilliant scheme to force inclusiveness on the students, one that will foster humanitarianism and diversity, and will once and for all prove that Coloradans are not racist or biased and prove once and for that they stand for the integration of thought and deed…by dividing and segregating the student population.

What is this grand scheme called?  The Social Justice Living Environment (or How We Splinter America Even More Than It Already Is In The Wake of the Obama Reign of Division Dorms).

The SJW haven is divided into three separate “living environments” (sort of like the reptile/amphibian attraction in the zoo).

The first is called the “Living Learning Community,” also referred to by future residents as the “Go Away Whitey!” facility.  These are specifically set aside for Black students (and those who identify as Black) “and their allies.”  The “allies” part is somewhat mystifying, however.  I imagine it has something to do with Racial Pacts, secret handshakes and special decoder rings that help one decipher the intricacies of something Nancy Pelosi or Maxine Waters is attempting to convey.

The Living Learning Community for black-identified students and their allies will provide a supportive, social and communal space for students who identify with elements of the African & Black Diaspora, according to the CU Boulder housing and dining services website.

Students gain access to artifacts, critical conversation and educational programming that create an inclusive and productive atmosphere within the residence hall, the housing website explains.

We hope to foster a community of diversity and communication not only in Hallett but all across campus, Akirah Bradley, the CU Boulder dean of students, declares in a press school press release.

We are beyond excited for the introduction of this new program and the opportunity to build communities grounded in intercultural dialogue, Bradley also explains as she describes the dorms segregated by race and sexual preference.

So, let me see if I can get this straight…

It creates inclusion and fosters diversity and communication…by sequestration?  You may ask yourself, how can this be?  How can they teach Blacks to not be afraid of White supremacists and Whites not to want to kill Blacks on sight?  How is that possible?

Before I answer that question, let's move on the next of the amazing “living environments” where outsiders can watch through glass as the inhabitants mill about and display something we like to call “Liversity” (the act of living with diversity).