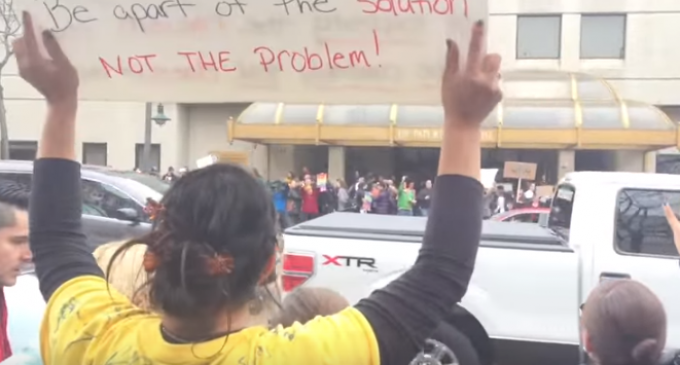 For instance, an anti-Trump protestor accused a peaceful rally attendee of sexually harassing her before sucker-punching him. Although the media ran with the fact that the girl got maced after attacking the attendee, they left out the part about her punching him and falsely claiming he touched her against her will.

The week hasn't even come to an end and video has already emerged of anti-Trump protestors engaging in intolerant behavior at another event. The protestors can be seen carrying signs saying that the real estate tycoon is a Nazi, with one giving the middle finger to Trump supporters.

Without even skipping a beat, the protestors break into a chant to “end hate,” with hate referring to the ideas and policies of Trump and not, say, making obscene gestures at people with different political beliefs.

The video is demonstrative of the left's cognitive dissonance when it comes to hate. When conservatives do or say nasty things, it's proof of a wider contempt for civility and cruelty towards others on the right. However, when liberals do it, it's just brave progressives standing up to evil bigots.

See this nonsense for yourself: