Little did NBC Sports reporter Kelli Stavast know when she ‘misheard' chants of “F*ck Joe Biden” as “Let's go Brandon” that she was going to hand Biden opponents, now the majority of the US, a rallying cry that signifies not only the sentiment felt towards China Joe, but also the mainstream media's fake interpretation of everything wrong with our country.

And as a bonus, you can chant it in front of your kids. Thanks, Kelli!

Rapper Loza Alexander released a song by the same name on TikTok and it immediately topped the charts as No. 1 on Apple Music’s hip-hop/rap genre and No. 2 across all music. It was only beaten by Adele. 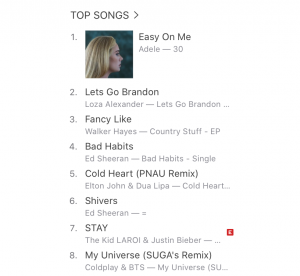 Loza's rap has received such acclaim that fans started the #LetsGoBrandonChallenge. Submissions from several beauties and patriots dancing or creating interesting videos to the song have also gained much traction.

Turn the page for the latest if FJB, or rather “Let's go Brandon”, videos.

Heck, there's even a farm version.