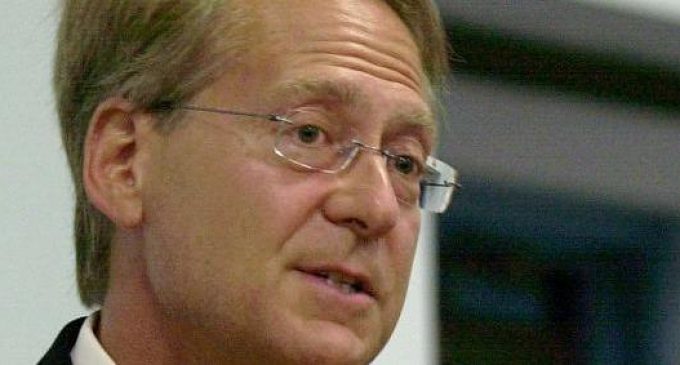 The NSA apparently don't know when to quit and it's got them – and President Obama – firmly in his crosshairs. Not one to back down from official bullying and illegal surveillance tactics by the government, Larry Klayman now suggests he will push the case for Obama's impeachment.

NEW YORK – Fresh from winning a restraining order against the National Security Agency’s telephone surveillance, attorney Larry Klayman declared that the misdeeds of Richard Nixon, who resigned in disgrace, pale in comparison to President Obama’s.

“In Watergate, Richard Nixon faced impeachment for breaking into the offices of the chairman of the Democratic National Party,” Klayman told WND in an interview.

“Obama has broken into the homes of 300 million Americans.”

WND asked Klayman if he was calling for the impeachment of Obama.

“Yes,” Klayman responded. “The NSA and the Obama administration are engaging in criminal behavior, and both are lying.”

He called it the “most outrageous violation of constitutional rights in American history.”

Klayman is a WND columnist and founder of the political-watchdog organizations Judicial Watch and FreedomWatch.

His case, on behalf of a Verizon Wireless customer, was launched after the extent of government spying on Americans was unveiled by former NSA contractor Edward Snowden, who said the court’s decision made him feel justified in releasing classified documents.

Named in the case are the NSA, Department of Justice and several U.S. officials, including President Obama and Attorney General Eric Holder.

Klayman alleged in a WND interview Monday that after he filed the case, he was put under surveillance by the NSA.

Keep your eye on this case, which we will follow here at Truth and Action and share with friends. Public scrutiny is the first line of defense against these tactics.

The complaint alleges the government, with the participation of private telephone companies, has been conducting “a secret and illegal government scheme to intercept and analyze vast quantities of domestic telephonic communications.”

Klayman dismissed Obama administration arguments that the NSA is collecting only “metadata” and not recording for analysis the content of ordinary citizens’ conversation unless there is suspicion of criminal activity that might violate the Patriot Act or other national security legislation.

“The NSA takes interest in countless Americans, even boyfriends and girlfriends of NSA employees, as we now know,” he argued.

“If you end up being a person of interest to the NSA or the Department of Justice, the NSA recording of telephone conversations permits the NSA to know everything about you, even whether or not your wife is pregnant, just by the number of times she calls her doctor and the pattern of her health-care-related telephone conversations.”

Klayman charged that Obama’s criminal violations in the NSA case are more egregious than Nixon’s violations of law in Watergate.

Klayman also praised the courage of Judge Richard Leon of the U.S. District Court for the District of Columbia, who ordered injunctive relief in the case, staying the order only long enough to permit the government a timely appeal.

“Very few people have the guts to take on the NSA,” Klayman said. “Judge Leon knows the NSA can get into the communications of federal judges. That’s the level of intimidation the NSA is capable of handing out. Judge Leon is an American hero for his willingness to take on the NSA and the Obama administration.”

This is exactly the approach that is likely to be most effective against government bullying: constant public exposure of their tactics.

“I don’t think Judge Leon is prepared to put up with efforts by the Obama administration to drag this case out,” Klayman said.

In response to a request by DOJ attorney James J. Gilligan for more time, Leon showed no patience.

“We work 24/7 around this courthouse, my friend,” Leon explained to Gilligan. “Twenty-four/seven. I don’t want to hear anything about vacations, weddings, days off. Forget about it. This is a case at the pinnacle of public national interest, pinnacle. All hands 24/7. No excuses.”

When Gilligan argued the court would be better served if the government had a chance to fully prepare arguments, Leon pointed out that the case had been filed four months earlier.

“You have had, not you personally, the Department of Justice, the NSA and the allied government agencies that have an interest in this, have had four months to think through its position,” Leon responded. “That’s a lot of time, Mr. Gilligan. I am sad to say I don’t believe or assume that they worked seven days a week for four months. I wish it were true, but I am sure it isn’t.”

In granting Klayman an order for an injunction against the NSA, Leon indicated a stay pending appeal was appropriate because of the national security interests the government was asserting in the case.

At the same time, Leon ordered the government to act quickly in appealing his decision and to be prepared to obey the injunction immediately should the government lose the appeal.

“However, in light of the significant national security interests at stake in this case and the novelty of the constitutional issues, I will stay my order pending appeal,” Leon wrote in his decision.

“In doing so, I hereby give the government fair notice that should my ruling be upheld, this ruling will go into effect forthwith,” he said. “Accordingly, I fully expect that during the appellate process, which will consume at least the next six months, the government will take whatever steps necessary to prepare itself to comply with this order when, and if, it is upheld. Suffice it to say, requesting further time to comply with this order months from now will not be well received and could result in collateral sanctions.”