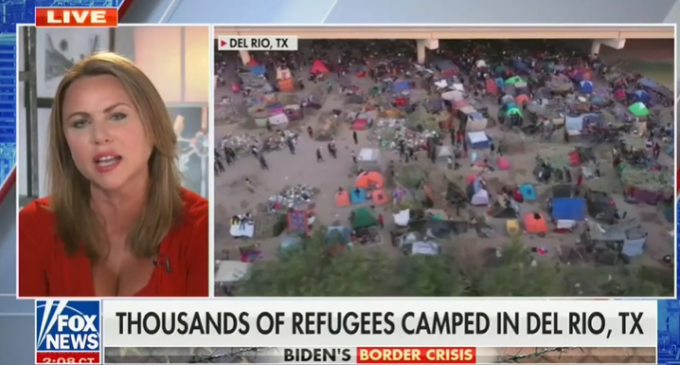 While we see the words ‘mass deportation' flash across different mainstream media outlet headlines claiming that the Biden administration is sending the thousands of Haitian migrants in Del Rio back to their country, other outlets, such as the New York Post and the Daily Mail, are reporting that most of the migrants are being shipped all over the country.

Thousands of Haitian migrants are being freed into the US on a ‘very, very large scale' rather than being flown out on deportation flights as the Biden administration promised, according to officials.

Two US officials with knowledge of the situation in Del Rio – where a peak of around 14,600 mostly Haitian migrants were camped out under a bridge at the weekend after crossing into the US from Mexico – said thousands have been released into the US with notices to appear at an immigration court in 60 days' time under the so-called ‘catch and release' scheme.

Others have been sent on buses and planes to other parts of the US to be processed by Border Patrol agents there, they said.

The exact number released is unclear, with Texas Governor Greg Abbott saying that 8,600 migrants were still in Del Rio on Tuesday afternoon.

Deportation flights began on Sunday, and by Wednesday morning, over 1,000 migrants had been flown back to Haiti, a source with knowledge of the matter told DailyMail.com.

When White House press secretary Jen Psaki was asked this week why migrants aren't required to be vaccinated against the coronavirus before entering the U.S. but foreign nationals who arrive by plane are, she claimed that “it is not the same thing.”

“As individuals come across the border, they are both assessed for whether they have any symptoms, if they have symptoms, the intention is for them to have to be quarantined,” Psaki said of migrants entering the U.S. “That is our process.”

“They are not intending to stay here for a lengthy period of time,” Psaki said of foreign nationals when pressed for further explanation. “I don’t think it’s the same thing. It is not the same thing.”

So Biden, who is attempting to impose constitutionally questionable vaccine mandates, threatening governors who oppose him, because the ‘grave threat' the virus presents has no problem with shipping unvaccinated migrants, who could be ‘asymptomatic, all over the country?
Yea that makes sense….if you take into account an insinuation Lara Logan just made. Move to page two