In fact, there has been over 3 dozen human studies that has shown a link between intelligence reduction and fluoride, as well as a host of other issues, such as dementia, thyroid disease, increased tumor and cancer rate, muscle disorders, just to name a few.

Most countries do not allow water fluoridation, not even China, citing its toxic properties.

With all the studies and evidence, why not elimiate this potentially harmful substance by using fluoride free toothpaste and getting a whole-house water filter that removes fluoride?

Most Americans drink fluoride every day as part of what critics refer to as an involuntary mass-medication program. Organized dentistry argues that it is good for children’s teeth. However, according to a recent report in one of the world’s most prestigious medical journals, the industrial chemical added to water supplies across much of the United States is actually a dangerous developmental neurotoxicant.

Echoing the recent findings of another Harvard study suggesting that fluoride is associated with drastic reductions in the IQ of children, The Lancet journal reportclassified the chemical as a harmful neurotoxin. That puts it right alongside lead, mercury, arsenic, and other dangerous substances, the authors said, warning of the potentially far-reaching consequences.

“A meta-analysis of 27 cross-sectional studies of children exposed to fluoride in drinking water, mainly from China, suggests an average IQ decrement of about seven points in children exposed to raised fluoride concentrations,” noted the authors, Dr. Philippe Grandjean of the Harvard School of Public Health and Dr. Philip Landrigan of New York’s Icahn School of Medicine.

The level of fluoride analyzed in most of the studies was less than four milligrams per liter, according to media reports. Under U.S. Environmental Protection Agency rules surrounding water fluoridation, municipal governments are allowed to use more than the concentrations cited in the study, meaning American kids could be suffering even more serious neurological complications from exposure to the chemical.

“Our very great concern is that children worldwide are being exposed to unrecognized toxic chemicals that are silently eroding intelligence, disrupting behaviors, truncating future achievements and damaging societies, perhaps most seriously in developing countries,” added the authors, warning of numerous problems associated with exposure to such substances including autism, attention deficit hyperactivity disorder, and other learning disabilities.

In The Lancet Neurology, the two public health experts noted that in 2006, they performed a systematic review that identified five industrial chemicals as “developmental neurotoxicants.” Those included lead, methyl mercury, arsenic, toluene, and polychlorinated biphenyls. Since then, they said, epidemiological studies had documented another six: fluoride, manganese, chlorpyrifos, dichlorodiphenyltrichloroethane, tetrachloroethylene, and the polybrominated diphenyl ethers.

“Fluoride seems to fit in with lead, mercury, and other poisons that cause chemical brain drain,” explained Harvard’s Dr. Grandjean. “The effect of each toxicant may seem small, but the combined damage on a population scale can be serious, especially because the brain power of the next generation is crucial to all of us.”

There is “strong evidence” that exposure to those chemicals, which are found in a broad array of products, is linked to increases in brain development disorders, the authors said. Already, such disorders affect an estimated one in six children. According to the review, it is time to take action, including testing existing industrial chemicals as well as new ones for potential problems. Billions of dollars could be saved, they added.

Opponents of fluoride being added to the water and of involuntary mass-medication of the public, meanwhile, seized on the findings to push for an end to water fluoridation entirely. “In light of the new classification of fluoride as a dangerous neurotoxin, adding more fluoride to Americans’ already excessive intake no longer has any conceivable justification,” said Fluoride Action Network Executive Director and retired chemistry professor Dr. Paul Connett in a statement. “We should follow the evidence and try to reduce fluoride intake, not increase it.”

At least one national organization, The John Birch Society, has been against adding fluoride to water supplies since the 1950s. In 1992, libertarian icon Murray Rothbard wrote a scathing critique of the practice that appeared in this magazine, a JBS affiliate, attacking fluoridation from multiple angles. “Compulsory mass medication is medically evil, as well as socialistic,” he said.

Though it was never a primary campaign of the JBS, the establishment and its apparatchiks in the press seized upon the opposition to fluoridation using Alinsky-style tactics in a half-baked effort to demonize the constitutionalist organization and scientific critics of adding fluoride to water supplies. Medical professionals and scientists opposed to the practice were often slandered as “quacks,” too. 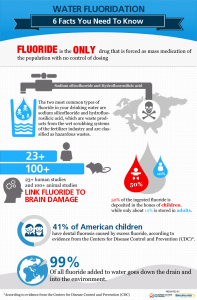