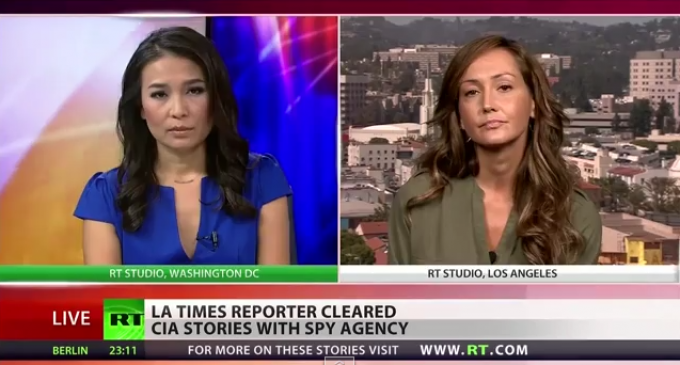 Email exchanges between CIA public affairs officers and Ken Dilanian, now an Associated Press intelligence reporter who previously covered the CIA for the Times, show that Dilanian enjoyed a closely collaborative relationship with the agency, explicitly promising positive news coverage and sometimes sending the press office entire story drafts for review prior to publication. In at least one instance, the CIA’s reaction appears to have led to significant changes in the story that was eventually published in theTimes.

“I’m working on a story about congressional oversight of drone strikes that can present a good opportunity for you guys,” Dilanian wrote in one email to a CIA press officer, explaining that what he intended to report would be “reassuring to the public” about CIA drone strikes. In another, after a series of back-and-forth emails about a pending story on CIA operations in Yemen, he sent a full draft of an unpublished report along with the subject line, “does this look better?” In another, he directly asks the flack: “You wouldn’t put out disinformation on this, would you?”

Dilanian’s emails were included in hundreds of pages of documents that the CIA turned over in response to two FOIA requests seeking records on the agency’s interactions with reporters. They include email exchanges with reporters for the Associated Press, Washington Post, New York Times, Wall Street Journal, and other outlets. In addition to Dilanian’s deferential relationship with the CIA’s press handlers, the documents show that the agency regularly invites journalists to its McLean, Va., headquarters for briefings and other events. Reporters who have addressed the CIA include the Washington Post‘s David Ignatius, the former ombudsmen for the New York Times, NPR, and Washington Post, and Fox News’ Brett Baier, Juan Williams, and Catherine Herridge.

Dilanian left the Times to join the AP last May, and the emails released by the CIA only cover a few months of his tenure at the Times. They show that in June 2012, shortly after 26 members of congress wrote a letter to President Obama saying they were “deeply concerned” about the drone program, Dilanian approached the agency about story that he pitched as “a good opportunity” for the government.

The letter from lawmakers, which was sent in the wake of a flurry of drone strikes that had reportedly killed dozens of civilians, suggested there was no meaningful congressional oversight of the program. But Dilanian wrote that he had been “told differently by people I trust.” He added:

Not only would such a story be reassuring to the public, I would think, but it would also be an opportunity to explore the misinformation about strikes that sometimes comes out of local media reports. It’s one thing for you to say three killed instead of 15, and it’s another for congressional aides from both parties to back you up. Part of what the story will do, if you could help me bring it to fruition, is to quote congressional officials saying that great care is taken to avoid collateral damage and that the reports of widespread civilian casualties are simply wrong.

Of course, journalists routinely curry favor with government sources (and others) by falsely suggesting that they intend to amplify the official point of view. But the emails show that Dilanian really meant it.

Over the next two weeks, he sent additional emails requesting assistance and information from the agency. In one, he suggested that a New America Foundation report alleging that drone attacks had killed many civilians was exaggerated, writing that the report was “all wrong, correct?”

A number of early news accounts reported that more than a dozen people died in the June 4, 2012, drone strike that killed Al Qaeda leader Abu Yahya al-Libi in Pakistan. But in a June 20 email to the CIA, Dilanian shared a sentence from his story draft asserting that al-Libi had died alone. “Would you quibble with this?” he asked the CIA press officer.

On June 25, the Times published Dilanian’s story, which described thorough congressional review of the drone program and said legislative aides were allowed to watch high-quality video of attacks and review intelligence used to justify each strike. Needless to say, the agency hadn’t quibbled with Dilanian’s description of al-Libi’s solitary death. Video provided by the CIA to congressional overseers, Dilanian reported, “shows that he alone was killed.”

That claim was subsequently debunked. In October of 2013, Amnesty International issued a report, based on statements from eyewitnesses and survivors, that the first missile strike targeting al-Libi killed five men and wounded four others. Al-Libi was not even among those victims; he and up to fifteen other people died in a follow up attack when they arrived at the scene to assist victims. Some of those killed were very likely members of al Qaeda, but six were local tribesmen who Amnesty believed were there only as rescuers. Another field report published around the same time, this one by the Bureau of Investigative Journalism, also reported follow-up drone strikes on civilians and rescue workers — attacks that constitute war crimes.

Dilanian has done some strong work and has at times been highly critical of the CIA. For example, in July 2012 he wrote a piece about sexual harassment at the agency that angered the press office. In reply to an email from a spokesperson, Dilanian said that complaints about his story were “especially astonishing given that CIA hides the details of these complaints behind a wall of secrecy.”

But the emails reveal a remarkably collegial relationship with the agency. “I am looking forward to working with you, Ken,” a newly hired agency flack wrote him in a March 1, 2012, email.

“Hooray!” Dilanian replied. “Glad to have you guys.”

On March 14, 2012, Dilanian sent an email to the press office with a link to a Guardian story that said Bashar Al-Assad’s wife had been buying a fondue set on Amazon while Syrian protesters were gunned down. “If this is you guys, nice work,” he wrote. “If it’s real, even better.”

The emails also show that Dilanian shared his work with the CIA before it was published, and invited the agency to request changes. On Friday April 27, 2012, he emailed the press office a draft story that he and a colleague, David Cloud, were preparing. The subject line was “this is where we are headed,” and he asked if “you guys want to push back on any of this.”

It appears the agency did push back. On May 2, 2012, he emailed the CIA a new opening to the story with a subject line that asked, “does this look better?”

The piece ran on May 16, and while it bore similarities to the earlier versions, it had been significantly softened.

Teams of CIA officers, private contractor and special operations troops have been inserted in southern Yemen to work with local tribes on gathering intelligence for U.S. drone strikes against militants, U.S. officials and others familiar with the secret operation said.

Here’s the version that was published:

In an escalation of America’s clandestine war in Yemen, a small contingent of U.S. troops is providing targeting data for Yemeni airstrikes as government forces battle to dislodge Al Qaeda militants and other insurgents in the country’s restive south, U.S. and Yemeni officials said.

In another case, Dilanian sent the press office a draft story on May 4, 2012, reporting that U.S. intelligence believed the Taliban was growing stronger in Afghanistan. “Guys, I’m about to file this if anyone wants to weigh in,” he wrote.

On May 7, 2012, the AP, Dilanian’s current employer, broke a story about a secret CIA operation that “thwarted an ambitious plot by al-Qaida’s affiliate in Yemen to destroy a U.S.-bound airliner.” The next day, Dilanian sent the CIA a detailed summary of a planned piece that followed up on (and took issue with) the AP story. “This is what we are planning to report, and I want to make sure you wouldn’t push back against any of it,” he wrote.

Dilanian also closely collaborated with the CIA in a May 2012 story that minimized the agency’s cooperation with director Kathryn Bigelow and screenwriter Mark Boal on their film about the assassination of Osama bin Laden, Zero Dark Thirty. Republicans had been criticizing the Obama Administration for revealing classified details about the operation to Boal and Bigelow while withholding them from the public.

“My angle on this is that…this is a pretty routine effort to cooperate with filmmakers and the sort of thing the CIA has been doing for 15 years,” Dilanian wrote in an email to Cynthia Rapp, the head of the agency’s press office. “This is a storyline that is in your interest, I would think, to the extent you could provide information about how routine it is to offer guidance to entertainment people who seek it out—including ones who are Democrats!—it would show that this latest episode is hardly a scandal.”

Dilanian’s pitch appears to have worked. His subsequent story included an on the record comment from CIA spokesman Todd Ebitz. One year later,internal CIA documents released under the FOIA showed that the agency’s office of public affairs—the same people Dilanian had been working with–had asked for and received changes to the Zero Dark Thirty script that portrayed the agency in a more favorable light.

Reached by The Intercept for comment, Dilanian said that the AP does not permit him to send stories to the CIA prior to publication, and he acknowledged that it was a bad idea. “I shouldn’t have done it, and I wouldn’t do it now,” he said. “[But] it had no meaningful impact on the outcome of the stories. I probably should’ve been reading them the stuff instead of giving it to them.”

Dilanian said he was not sure if Los Angeles Times rules allow reporters to send stories to sources prior to publication. The Time’s ethics guidelines, however, clearly forbid the practice: “We do not circulate printed or electronic copies of stories outside the newsroom before publication. In the event you would like to read back quotations or selected passages to a source to ensure accuracy, consult an editor before doing so….”

Bob Drogin, the Times’ deputy bureau chief and national security editor, said he had been unaware that Dilanian had sent story drafts to the CIA and would have not allowed him to do it. “Ken is a diligent reporter and it’s responsible to seek comment and response to your reporting,” he told me. “But sharing story drafts is not appropriate.”

AP spokesman Paul Colford told The Intercept that the news organization is “satisfied that any pre-publication exchanges that Ken had with the CIA before joining AP were in pursuit of accuracy in his reporting on intelligence matters,” adding that “we do not coordinate with government agencies on the phrasing of material.” 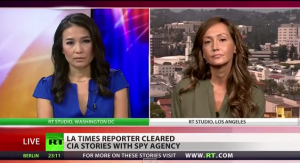