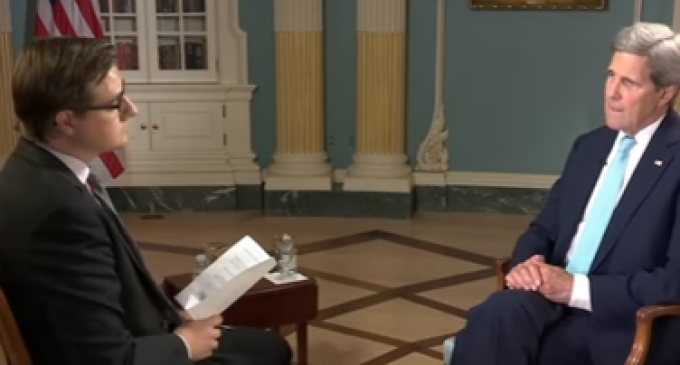 It's no secret that the liberal media has an obsession with Donald Trump. You only need to turn on the television or computer to see a story (or several) that attempt to drag his name through the mud. However, much like the anti-Trump protestors who stand outside of his rallies, the more they attempt to drag his name through the mud, the more popular he becomes. And because of that, people like President Obama, Hillary Clinton and Secretary of State John Kerry can't seem to put a dent in the the unstoppable locomotive that is Trump's campaign, though they are trying.

For example, during an interview with MSNBC's Chris Hayes, Kerry was asked about Trump saying it's good that his presidential bid is “rattling” foreign countries. As usual, Kerry responded with a comment of little intelligence, first making a joke that foreign policy isn't one of Trump's “hotel deals” and then saying that foreign policy is about trust between nations. Let that sink in for a moment . . . Kerry talking about trust.

Let's not forget the many stupid things that Kerry has said and done over the past year, including preaching to college grads about “borderless worlds”, sending classified intel through a non-official email (sound familiar?) and the best of the three, claiming that the bible commands America to protect muslims for global warming. Take a moment if you need, to literally LOL.

Read more about Kerry's comments on the next page.