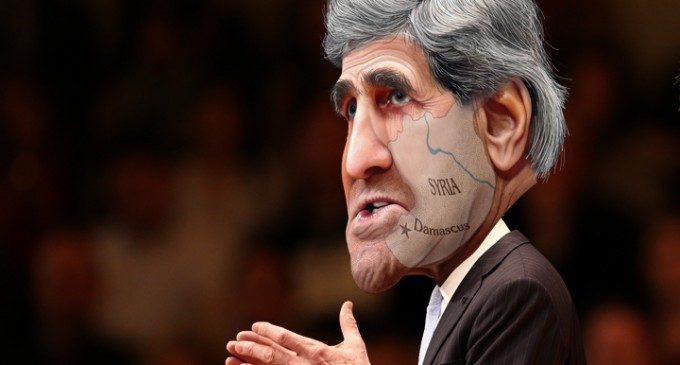 On Monday, Secretary of State John Kerry said a U.S. strike on Syria would be ‘unbelievably small.' Did he mean it wouldn't me much of an effect? Just a token saber-rattling from the U.S.? Is Kerry suggesting that the internal dispute in Syria is so serious the United States must become involved, but not in any serious or effective way?

In fact, Kerry's statement likely shows the truth of the disdainful attitude the Obama administration has for the American public. ‘Unbelievably small' really means, ‘go away, John Q. Public, and stop bothering your betters. We'll decide how to proceed with Syria any damn way we want and there's nothing you can do about it.

Do you believe Sen. Kerry's claim? Let us know in the comments section below if you think Syrians will find a U.S. strike on their country ‘unbelievably small.'

As President Barack Obama kicks off an all-out push for a strike on Syria, Secretary of State John Kerry came under fire on Monday for saying any attack would be “unbelievably small” and suggesting the Syrian ruler still had a week to give up his chemical weapons to avoid a U.S. assault – a remark Kerry’s spokeswoman later attempted to clarify.
The off-key comments came in a joint press conference in London with Britain’s foreign secretary, where Kerry said the strike would be able to harm Assad without putting American troops on the ground and with a “very limited, very targeted, short-term effort.”
“That is exactly what we are talking about doing – unbelievably small, limited kind of effort,” Kerry said, according to reports.
The comments, which dismayed even supporters of an attack on Syria, added fuel to the debate as Obama launches a full court press 48-hour media and political blitz to try to sell the plan to a skeptical American public and Congress.