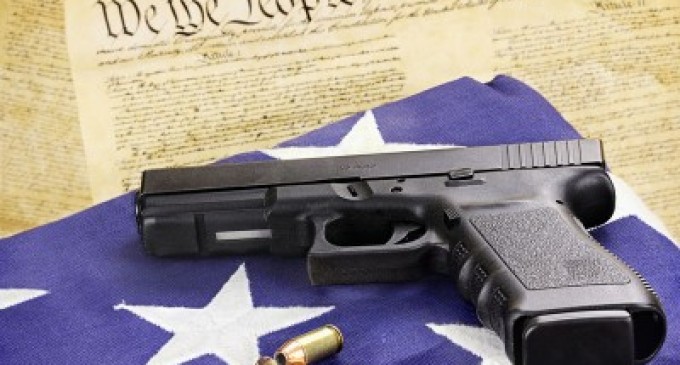 The fight for our 2nd amendment rights is on.

The states are using a 19th century legal tactic called nullification – whereas states can simply declare federal laws invalid if they think the laws are unconstitutional.

It could also mean jail or fines for those who try to enforce these unconstitutional laws. The measure in Idaho, which was signed by Gov. Butch Otter on March 19, would fine state or local officials who enforced federal gun control laws to fines of up to $1,000.

State legislators in Missouri and Idaho are trying to prevent the enforcement of federal gun control laws with a legal tactic called nullification – and if successful, the new laws could result in jail or fines for those who do enforce them.

The measure in Idaho, signed by Gov. Butch Otter March 19, would subject state or local officials who enforced federal gun control laws to fines of up to $1,000. The new law prohibits state officials from enforcing “federal executive orders, agency orders, statutes, laws, rules, or regulations” enacted after March 19, the effective date of the new law. It passed the state Senate, 34-0 and the House, 68-0. It was SB 1332.

“By signing this nullification bill into law, Idaho has joined an elite class of states that are telling the feds to ‘get lost’ — especially when it comes to unconstitutional gun control infringements,” said Erich Pratt, director of communications for Gun Owners of America.

“This is an important first step for Idaho,” Maharrey said. “Getting this law passed will ensure that any new plans or executive orders that might be coming our way will not be enforced in Idaho. Then, once this method is established and shown to be effective, legislators can circle back and start doing the same for federal gun control already on the books. SB1332 is an important building block for protecting the 2nd Amendment in Idaho.”

How to hide your guns, and other off grid caches…

The new Idaho law rests on a doctrine called “anti-commandeering.” “Simply put,” the Tenth Amendment Center explained on its website, “the federal government cannot force states to help implement or enforce any federal act or program.”

And In Missouri, Too

Proposed legislation in Missouri would give state officials the power to arrest and jail federal agents trying to enforce federal gun laws. It passed the state Senate, 23-10.

“I am proud to say that we have passed arguably one of the strongest Second Amendment protections in the country,” State Sen. Brian Nieves (R-Washington), the sponsor of Missouri’s Second Amendment Protection Act told the Associated Press. Under the law federal agents could face a year in jail and a $1,000 fine for enforcing gun control legislation.

Governor Jay Nixon vetoed a similar bill last year, and the supporters were not able to get enough votes for a veto override.

(a) Ban or restrict ownership of a semi-automatic firearm, magazine, or other firearm accessory; or

(b) Require any firearm, magazine, or other firearm accessory to be registered in any manner.

Nullification, the Nineteenth Century idea that states can simply declare federal laws invalid,cannot be squared with the Constitution’s declaration that federal law “shall be the supreme law of the land; and the judges in every state shall be bound thereby, anything in the constitution or laws of any state to the contrary notwithstanding.” Yet the sponsor of this unconstitutional bill, state Sen. Jared Carpenter (R-KY), claims that he can make an end-run around the Constitution because the command that duly-enacted federal law are supreme over state law “applies only if Congress is acting in pursuit of its constitutionally authorized powers, which he said wouldn’t apply to stricter gun measures.”