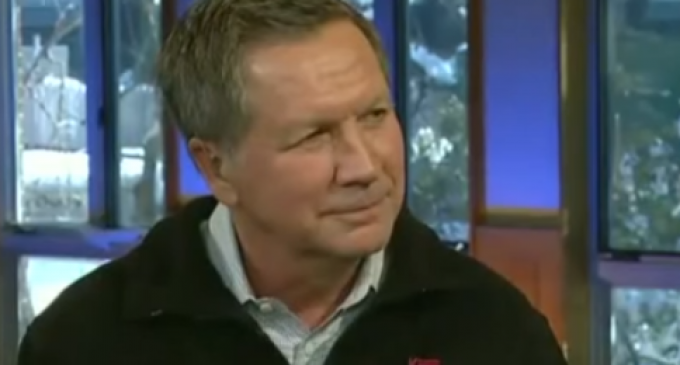 Although most might scoff at the idea that John Kasich might win the Republican nomination, his campaign has formulated a crafty scheme that might give him a shot at it.

Granted, it would still be a long shot, with it being statistically impossible at this point for the Ohio governor to actually secure a plurality of delegates. But he can, however, ensure that current frontrunner Donald Trump does not get the party nod later this year.

This would explain Kasich's continued involvement in the GOP primaries, with him earning his first victory only yesterday. Even then, the state in which he won was the one he governs, something that even the most unpopular candidates accomplish with little trouble.

Instead, a memo from a Kasich campaign staffer indicates that the plan is to stay running long enough so that “No candidate will win 1237 delegates.” Such a development will cause unprecedented pandemonium at what is likely to be one of the most heated Republican national conventions.

It's well known that the GOP establishment detests Donald Trump, but it hasn't acted in a way that suggests it is partial to Kasich. The withdrawal of insider stalwarts like Jeb Bush and Marco Rubio from the election limits their options however, so it is conceivable that they will rally behind the governor if – or when, rather -push comes to shove:

“'With a narrowing field, Gov. Kasich is the candidate best positioned to go toe-to-toe in the remaining states,' Weaver said in his memo. ‘Our internal data shows that Rubio voters break to Gov. Kasich by a 3:1 margin. Senator Rubio will have to decide about the future of his campaign, but we believe voters in the remaining states will see this as a 3-person race no matter what,' Weaver continued.

‘With the electoral map shifting significantly in our favor, Gov. Kasich is positioned to accumulate a large share of the almost 1,000 remaining delegates and enter Cleveland in strong position to become the nominee,' Weaver said.

On the topic of a contested convention, Kasich said in the Fox News Republican debate in Detroit that ‘We are already there.'

Breitbart News spoke to Kasich surrogate John Sununu Jr., of the New Hampshire Sununu dynasty, in the Spin Room after that debate about the possibility of a brokered convention for Kasich.

Sununu told Breitbart News that Kasich will gain delegates in the northern states, hold Trump to less than a majority share of delegates, and then win at a contested convention in Cleveland.”