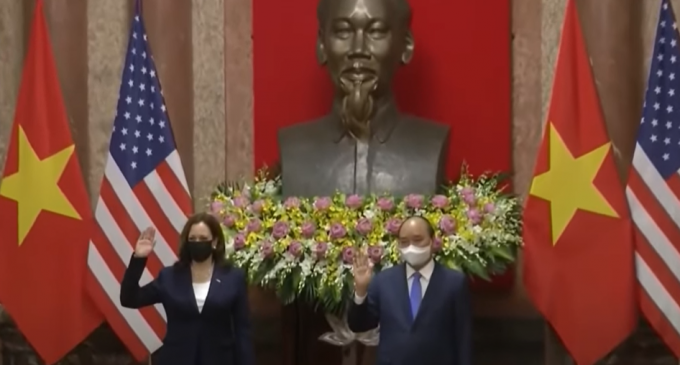 VP Kamala Harris posed with Vietnamese Communist leaders in front of the Ho Chi Minh sculptures last week, just as chaos struck Afghanistan that has, so far, claimed the lives of 13 U.S. servicemen. The timing couldn’t have been worse for the Biden administration.

Ho Chi Minh, founder of the Vietnamese Communist Party and president of North Vietnam from 1945 to 1969, carried out a class genocide against wealthy farmers and landowners, killing hundreds of thousands.

“The prospect of Harris visiting Vietnam at this particular moment raised the possibility of the worst photo op for an American in that country since Jane Fonda donned a helmet there in 1972,” Fox News said.

But this might not be the worst photo op of her trip!

Harris laid flowers at a site that she believed commemorated late Sen. John McCain, but instead, it celebrated him being shot down and captured.