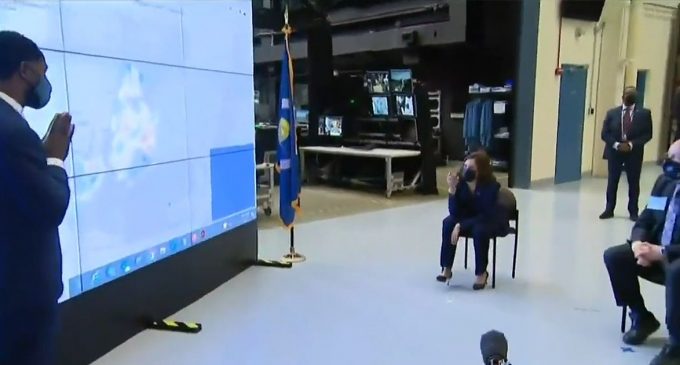 Some questioned if the headline to this story is a satirical piece by the Babylon Bee. If only it was. Sitting with scientists and engineers, Vice President Kamala Harris asked if satellites could track trees “by race” in various neighborhoods as part of “environmental justice” during a presentation on climate change.

As she met with scientists and engineers and received a firsthand look at how the climate is studied by the space program as well as how it provides data concerning planetary changes and their impacts, the vice president declared, “I truly believe space activity is climate action.”

In a clip originally shared by Deputy Director of Rapid Response at Republican National Committee (RNC) Jake Schneider, Harris is seen interrupting a presentation in order to share her “woke” inquiry.

“Can you measure trees — part of that data that you are referring to, [and it’s an issue of] EJ, environmental justice — that you can also track by race their averages in terms of the number of trees in the neighborhoods where people live?”

NEW – Kamala Harris asks NASA if they are able to "track trees" by race as part of "environmental justice."pic.twitter.com/zFMayeTbhJ

In response to the now viral clip, which has over one million views as of Sunday afternoon, many took to Twitter to mock Harris.

“This woman is a complete hack – and if this is not an act, she is also a moron…,” wrote retired senior intelligence operations officer Tony Shaffer.

I can’t get over the fact that “environmental justice” and “tree equity” are real phrases Democrats use.

I thought this was a Babylon Bee headline, turns out it's our totally serious Vice President.

Glad she has her priorities straight. https://t.co/XcC9Ad4tmD

“Officer Harris is just trying to figure out whether trees are racist or not,” wrote yet another.

“Yes, the world’s most inauthentic, unnatural politician Kamala Harris made news yesterday by pressing NASA on its ability to sort trees by race as part of an ‘environmental justice’ push,” another wrote.

“So the [vice] president Kamala Harris with NASA yesterday, able to ask any question about our universe, she asks if they are able to ‘track trees’ by race as part of ‘environmental justice,’” wrote one Twitter user.

“She’s going to keep dividing, nothing will stop them from creating a new, segregated society,” yet another wrote.