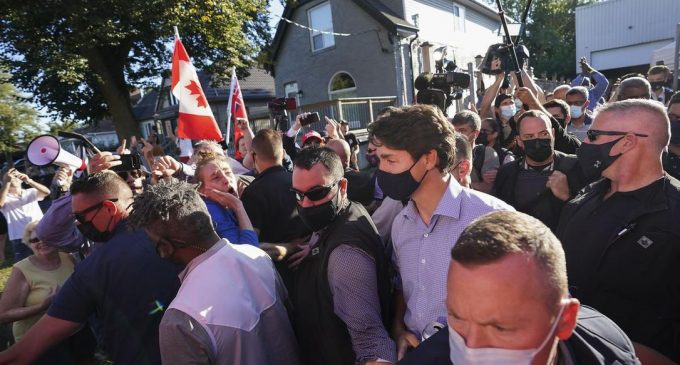 Canadian Prime Minister Justin Trudeau was pelted by rocks on Monday was making a stop at London, Ontario shortly after denouncing protestors as “anti-vaxxer mobs.” The liberal leader later confirmed that he was hit on the shoulder. Reports described the objects as “dime-size rocks.”

CBC reporter Sarah Sears tweeted a video showing 49-year-old Trudeau being pushed onto a bus by his aides to escape a group of around 100 unruly protesters angry at his vaccine mandate policies, which includes any citizen that travels by rail, public bus, or commercial flight as well as any federally regulated industries.

Though there were no injuries reported from the stone throwing incident, at least two others traveling on a media bus were hit by the rocks as well.

According to the BBC, Trudeau’s recent political rally stops have been marred by unusually aggressive crowds protesting Canada’s stringent Covid vaccine and prior lockdown policies. “Mr Trudeau called a snap election in mid-August, in the hope of gaining a majority government for his left-of-centre Liberal party. But his campaign has been disrupted by demonstrations against Covid-19 vaccine mandates and other restrictions,” the report says.

“Just over a week ago, the prime minister was forced to cancel an election rally after a crowd of angry protesters ambushed the event,” BBC continues.

Other political leaders condemned what they called “political violence” and an alarming atmosphere of “intimidation, harassment, and violence.” This despite the rocks appearing so small in size as to likely not able to hurt anyone.

Trudeau later brushed off the incident to reporters on his party’s campaign plane, saying, “There was little bits of gravel. It’s no big deal,” according to The Washington Post.

Here's the video of stones being thrown towards the Prime Minister while he was leaving his campaign stop in London, Ontario this evening pic.twitter.com/MNOVHIKMiY

At an event in London, ON, protesters threw some small rocks at Justin Trudeau, as he got on the bus to leave. Looks like Trudeau got hit.

Our @AnnieClaireBO who is traveling with Trudeau, says two people on the media bus were hit with the rocks but they're not hurt. #cdnpoli pic.twitter.com/7XM9uRC9yf

“Trudeau must go.” “Lock him up.” “Freedom.” – are some of the shouts outside the venue where @JustinTrudeau is making an appearance in #ldnont #elxn44 pic.twitter.com/ULxwEWFsNP

On vaccine passports, Trudeau says provincial passports will be an "interim measure, that will perhaps last a year or so, before (the feds) bring in a formalized passport version" #cdnpoli https://t.co/L3nCNkaBhO pic.twitter.com/DOtbiAa5Pk