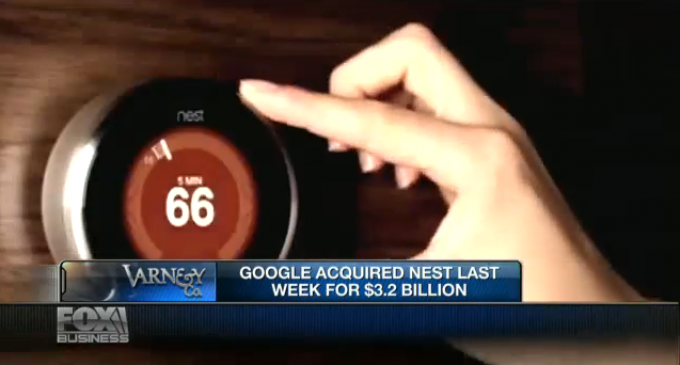 The federal government can spy on you through your dishwasher.

This isn't some bad joke or the ramblings of a paranoid in an asylum, this is actually happening! The government can track your every move as you walk through your house wirelessly through your microwave, dishwasher or through a new product called Nest.

Nest, which was recently acquired by Google for $3.2 billion, tracks consumer’s schedules in order to regulate the temperature of their homes.

The CEO of Nest, Tony Fadell, has made it a point of saying that they won't hand the information over to the feds, but as we've seen how the NSA works, that wouldn't be necessary…the NSA will just hack into the information wirelessly anyway.
As Judge Napolitano reveals, when General Petraeus was head of the CIA, he stated in a private meeting that the CIA can track people through their dishwashers and microwaves. Of course, they're only talking about it because they are doing it, or plan on doing it.
“It would be very difficult to buy a product that did not have a computer chip to which they can get access”, says Napolitano.

George Orwell could not have imagined such a police state as we have right now.

Every step you take, every move you make, I’ll be watching you.

NEW YORK, NY – Fox News Sr. Judicial Analyst Judge Andrew Napolitano appeared with Stuart Varney on Varney & Co to discuss the privacy implications with Google’s new Nest technology. Napolitano argued that the federal government would have the ability to tap into your home device and see what consumers are doing at anytime.

Napolitano revealed that the CIA has the ability to connect with microchips in dishwashers and microwaves. Apparently with this new technology the government will have the ability to detect when consumers are at home and even where they are in the home specifically.

Google acquired Nest labs last week for $3.2 billion dollars. The appliance tracks consumer’s schedules in order to regulate the temperature of their homes. Nest’s CEO stated that the company won’t be handing that data over to the federal government, but with the way the NSA operates, that probably won’t even be necessary.The CEO of Nest Tony Fadell stated that the “learning thermostat” will be operated on “transparent” “opt-in” practices. In an explanation posted to Nest’s website, Fadell assures consumers that: “Our privacy policy clearly limits the use of customer information to providing and improving Nest’s products and services. We’ve always taken privacy seriously and this will not change.”

A thermostat that tracks your habits does sound somewhat intimidating, even if it’s a little exciting and could be a useful technology. Thankfully, open source technology will always be available to give competition to the bigger companies. An alternative company called “Spark” is offering designs and specifications for consumers to be able to gain similar functionality from their thermostat without turning over any of their data to Google. It’s also much less expensive, costing around $70.

That doesn’t mean the NSA or CIA couldn’t access it however, it just makes it so that Google isn’t storing and collecting data on your movements and habits at home. Anyone who wants to use this technology should remember: Caveat Emptor.