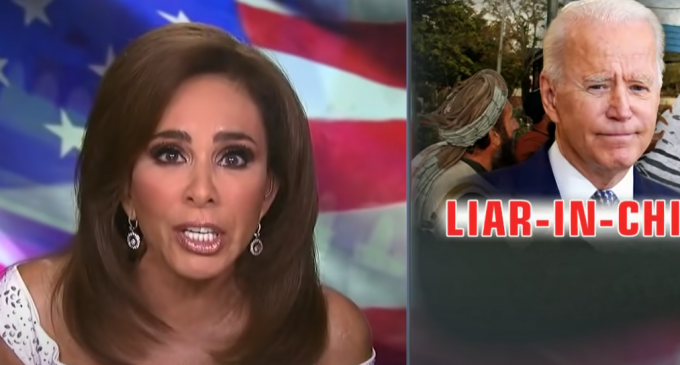 Judge Jeanine: The world is a less safe place today than it was the day Joe Biden took office. That's because Biden is non-transparent, is blatantly dishonest and is literally dangerous. Biden prioritizes Afghans with no connection to the United States and no vetting over American citizens. One hundred Afghan evacuees are being investigated for possible ties to terrorism. The world watches as Biden, according to reports flies Afghan men with child brides, pedophilia or human trafficking where I come from, into Wisconsin over Christians and young soccer players, where they are abandoned, stranded and left as hostages. Joe Biden has given a terrorist organization their own nation.

Judge Pirro called Biden the “Liar-in-Chief” who has “aided and abetted the enemy that we fought for 20 years with American blood and treasure.” And that while he tries to infrindge on the 2nd Amendendt he leaves billions to terrorists.