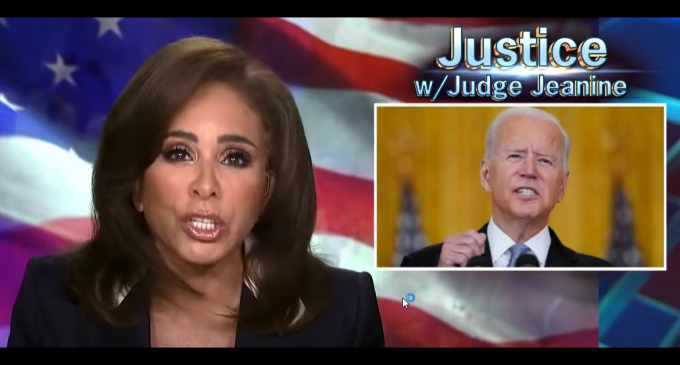 Jeanine Pirro absolutely blasted Joe Biden Saturday on “Justice with Judge Jeanine” for the horrendous handling of the withdrawal from Afghanistan, saying “so-called commander in chief” was a “fumbling, lying, idiotic fool incapable of extricating innocent Americans and Afghan allies” from behind enemy lines.

“Mark this day as the day the United States of America officially fell from grace as the world’s superpower, due to the ineptitude, the incompetence, and the dereliction of duty by a so-called commander in chief,” Pirro said in her opening. “A fumbling, lying, idiotic fool incapable of extricating innocent Americans and Afghan allies from behind enemy lines in the war zone we entered 20 years ago.”

She continued, “As American families of those trapped behind enemy lines, as Afghani Americans whose families helped us, and indeed Americans of all walks of life are glued to this crisis on television. They’re met with government officials who are not only not candid, or are confused or are just outright lying.”