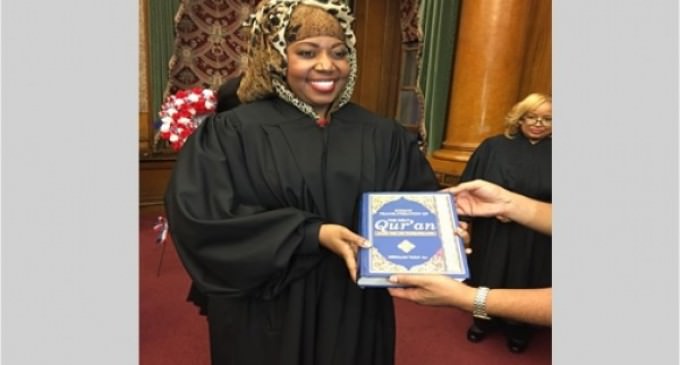 When Thomas Jefferson obtained a Koran (spelled Quran by the pretentious set) he was looking to see what it was all about. Before he became President, Jefferson was an ambassador along with John Adams. America at that time, was beset by some Islamic radicals your history books sometimes refer to as the Barbary Coast pirates.

They met with an ambassador from Tripoli and this polite chap informed them:

“That's what we do. We are commanded to do so by Allah.” Jefferson later wrote that the Tripoli ambassador told him, “It was written in their Koran that all nations which had not acknowledged the Prophet were sinners, whom it was the right and duty of the faithful to plunder and enslave; and that every mussulman (Muslim) who was slain in this warfare was sure to go to Paradise.”

Things were so much different then.

Speed up this hyper-enlightened post 9/11 era and we can't get enough of officials getting sworn in on a book that Jefferson once obtained to learn about extremists murdering our sailors.

Rep. Keith Ellison was sworn in on Jefferson's own Koran, as if this was some latent dream of the Founding Fathers. Most well read people were in on the joke and understood the moxy Rep. Ellison was showing by swearing in on the one book that was used to craft our defense of the first American attacks from Jihadists.

No one knew better except a few Glenn beck listeners and who cares anyway? The Koran is just like the Bible, etc…

Now we have an actual judge showcased just to provoke a reaction.