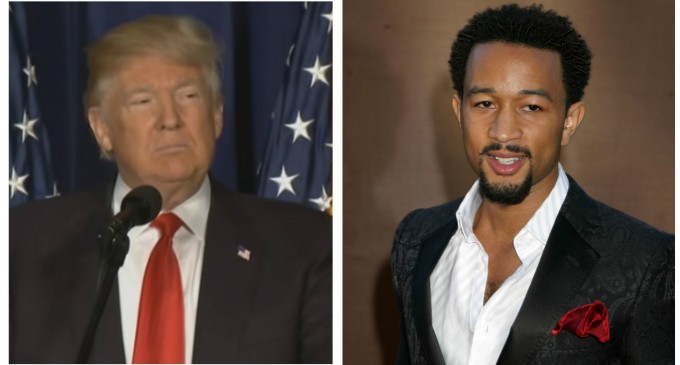 Another Hollywood star is lashing out at Donald Trump this week. It's a wonder that celebrities have any time to do work, considering how much time they devote to demonizing the Republican nominee.

This time, ten-time Grammy winner John Legend is taking up Big Hollywood's anti-Trump duties. As always, accusations of racism are at the heart of Hollywood's latest leftist rant.

It makes you wonder, if Trump's supposed racism is so abundantly obvious to the American citizen, why do so many people seem fixated on displaying it at every opportunity? Could it be that Trump's words themselves aren't actually racist? Maybe that's why a middleman is needed. They serve to twist and distort Trump's policies into something that would anger the American people, despite having only a passing resemblance to Trump's legitimate proposals.

See how John Legend uses fact-free fear tactics to vilify Trump on the next page: