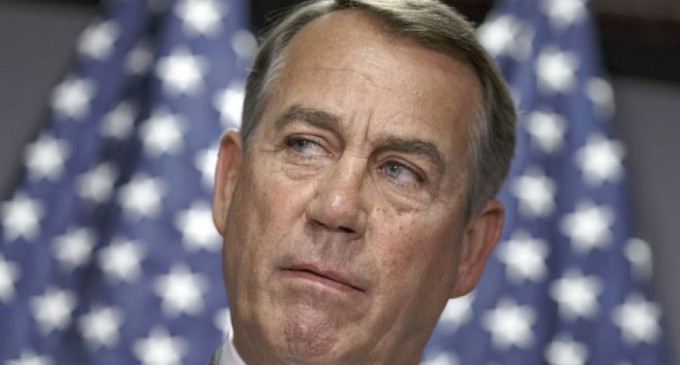 House Speaker John Boehner has announced he is going to sue Obama over his abuse of power, which is something long, long overdue.

“This is not about impeachment — it's about him faithfully executing the laws of this country,” Boehner said.

Did Boehner find some testosterone or is he caving into pressure?

Boehner had been weighing such a lawsuit in recent days, over concerns that Obama exceeded his constitutional authority with executive actions. Republicans have voiced frustration with Obama's second-term “pen and phone” strategy of pursuing policy changes without Congress — particularly environmental rules via the Environmental Protection Agency. Republicans also complained about numerous unilateral changes to the implementation of ObamaCare.

The lawsuit has not yet been filed. But asked Wednesday whether he intended to proceed, Boehner said: “I am.”

“My view is the president has not faithfully executed the laws,” he said. “What we have seen clearly over the last five years is an effort to erode the power of the Legislative Branch.”

The decision to sue still would have to be formally approved by a group of House leaders. Presuming that step is cleared, the suit is expected to be filed in a few weeks.

The plaintiff would be the House of Representatives.

White House Press Secretary Josh Earnest, asked about the suit at Wednesday's briefing, defended the president's executive authority — while blasting Republican leadership for what he called a “taxpayer-funded lawsuit against the president of the United States for doing his job.”

“It seems that Republicans have shifted their opposition into a high gear,” he said. “Frankly, it's a gear that I didn't know previously existed.”

Ahead of Boehner's announcement, House Democratic Leader Nancy Pelosi ridiculed the prospect of a suit against the president.

“I make of it as subterfuge,” she said. “They're doing nothing here. So they have to give some aura of activity.”