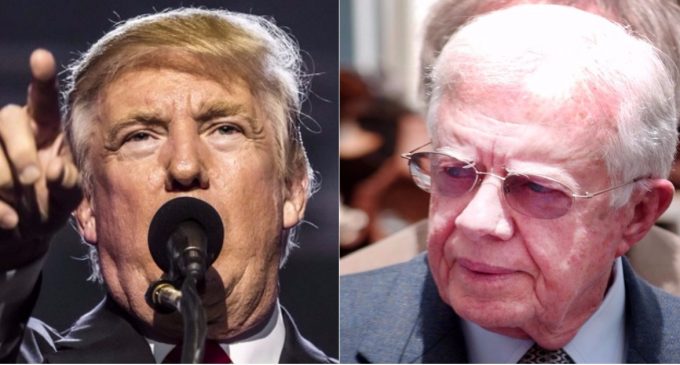 Jimmy Carter has a lot of opinions on President Trump and they’re not what you might expect.

The New York Times interview tried to focus on the idea that Carter would be willing to step-up to the plate and travel to North Korea as an envoy. Who in their right mind would send Jimmy Carter to negotiate – have we already forget the Iranian Hostage Crises and how it took a man like Reagan to save the day.

The Times really has no faith in their readers. They really except all three of their readers to be simple-minded enough to think Carter would be a good man to send to North Korea. But, a lot more was said that merits consideration.

Here are the top 5 highlights from Jimmy Carter’s recent interview with the New York Times:

1) Russia Did NOT Hijack the 2016 Presidential election

Carter was asked “Did the Russians purloin the election from Hillary?”

“I don’t think there’s any evidence that what the Russians did changed enough votes — or any votes,” Carter said.

Former President Carter is an old man. He knows he can say what he wants. His time is already numbered. It is telling is it not that he openly admits Russia was not involved?

This ties into the other major revelations surrounding his interview with the Times. Guess who Carter voted for? You might be surprised!

Head on over to the next page to learn this and the other 4 shocking bombshells from this explosive interview.