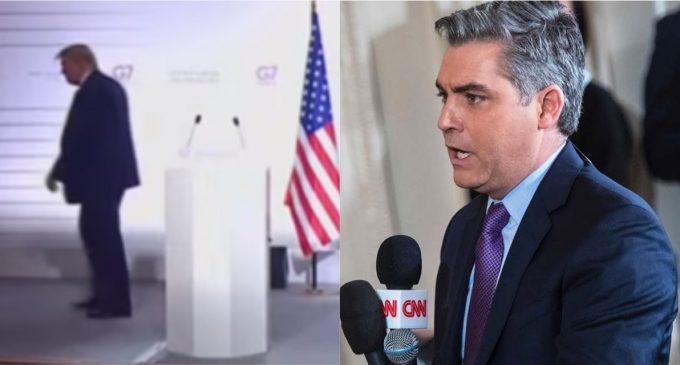 CNN White House reporter Jim Acosta repeatedly shouted at President Trump and eventually heckled him as he ended a press conference in Biarritz, France at the G7 summit Monday.

“I think I know more about the environment than most people. I want clean air, I want clean water, I want a wealthy country, I want a spectacular country with jobs, with pensions, with so many things and that’s what we’re getting,” Trump said. The president added he wants America to have “great wealth” so citizens are taken care of.

Acosta interrupted Trump as he was speaking, attempting to ask the President if he believed in climate change.

Trump snapped back, “You weren’t called.”

After the President wrapped up the press conference and began to walk offstage, Acosta continued to shout the question about climate change at him.

Acosta later complained on Twitter about the incident, saying, “At the end of the news conference I asked Trump whether he believed in climate change. He walked away from the stage and didn’t answer the question.”

“As this video shows, Trump walks away from perfectly capable of hearing the questions on whether he believes in climate change. He clearly heard and he didn’t want to answer it. Saying you want “clean air” and “clean water” isn’t the same as recognizing the climate change threat,” he said in another tweet.