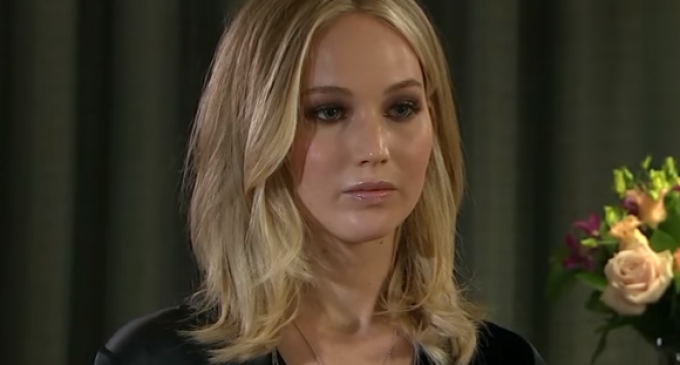 Hollywood “it” girl and Oscar winner Jennifer Lawrence knows exactly why ALL hurricanes occur, and it has nothing to do with the weather.

Hollywood stars love telling people what to do. But, have you ever found it odd that people famous for being able to pretend they’re living a false reality are cracked-up by the MSM to be experts on reality?

Here is the reality – then Lawrence’s sociopathic deranged attack against the President and his supporters. Liberals are furious that the hurricanes are disrupting their carefully planned racial riots following the tragic events in Charlottesville, NOT because people are losing their homes and lives.

Race was to be the new Russia until the hurricanes started hitting PROVING that when push comes to shove the majority of people help each other out regardless of race or differences.

What makes this even harder for liberals to swallow is that these powerful images of people helping each other regardless of race are happening in states that voted for President Trump in the 2016 presidential election. But, thankfully the liberal propaganda machine has a young blonde haired blue eyed actress to send out to explain to us how Trump Derangement Syndrome affects liberals ability to form complete sentences and understand reality.

Head on over to the next page to see Jennifer Lawrence tell channel 4 why she refuses to feel sorry for hurricane victims and why they these terrible disasters are happening.