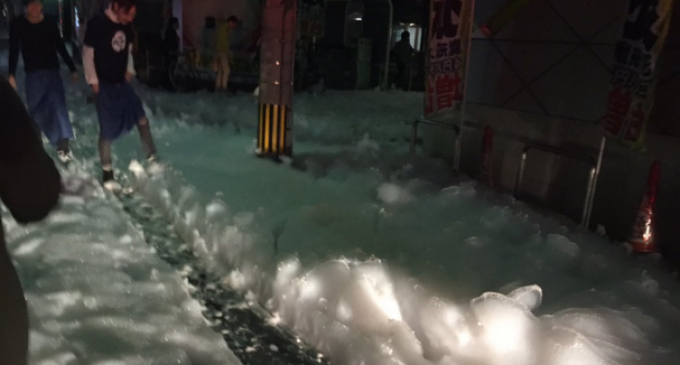 If you've ever put too much soap in your dishwasher, you're probably aware of what happens. And while it's fun to watch it happen to somebody else, it's not so great when your own kitchen is flooded with foam and bubbles. Now imagine what would happen if an entire city resembled your flooded kitchen. You get what happened in the Japanese city of Fukuoka.

A carpet of foamy bubbles filled the streets in the center of the city in the early hours of Saturday morning, shortly after tremors from a devastating earthquake struck. The quake shook the town violently with a magnitude of 7.3, leaving the entire city covered in foam and bubbles.

Some are speculating that the earthquake may have caused an underground pipe to burst, but a spokesperson at the Fukuoka town hall said that they don't know where the foam and bubbles came from or why they're flooding their streets.

Read about the death toll on the next page.