In their zeal to show their claimed moral superiority by allowing uncontrolled immigration into their countries, Western leaders are committing cultural and national suicide. Those who are flooding in primarily from the Middle East, are not interested in showing their appreciation to their new countries. Instead, they attack the existing Western culture and demand that western nations change their laws and ways of life to conform to their brand of Islam.

An Italian archbishop of the Catholic Church has already pointed out the danger of an Islamic take over of Italy. As Muslims pour into their country, ordinary citizens of Rome are finding it not only increasingly difficult to continue their ways of life, but also fear for their safety. Just walking down the street and getting into buildings has become a problem as Muslims engage in prayer rituals along the sidewalks, defying anyone to interfere.

This isn’t working and is not going to work. Instead of peaceful immigrants who are grateful for an opportunity for a new start on life in a new country, what you have here are effectively cultural invaders. These immigrants will refuse to assimilate into their new countries, but will instead insist that the existing citizens assimilate into their Islamic culture, or at least stand aside as they turn the culture upside-down.

Since much of what Islam teaches is utterly opposed to the principles guiding western democracies, this is not a problem that will respond to the typical leftist mantra that we “all just get along.” Instead, the problem, if allowed to grow and continue, will be resolved in an unpleasant way that is all too obvious as seen in this video.

Here are some demographics from Pew. Take it for what you will. In listening to the Italians speak, it appears that the numbers should be much higher. 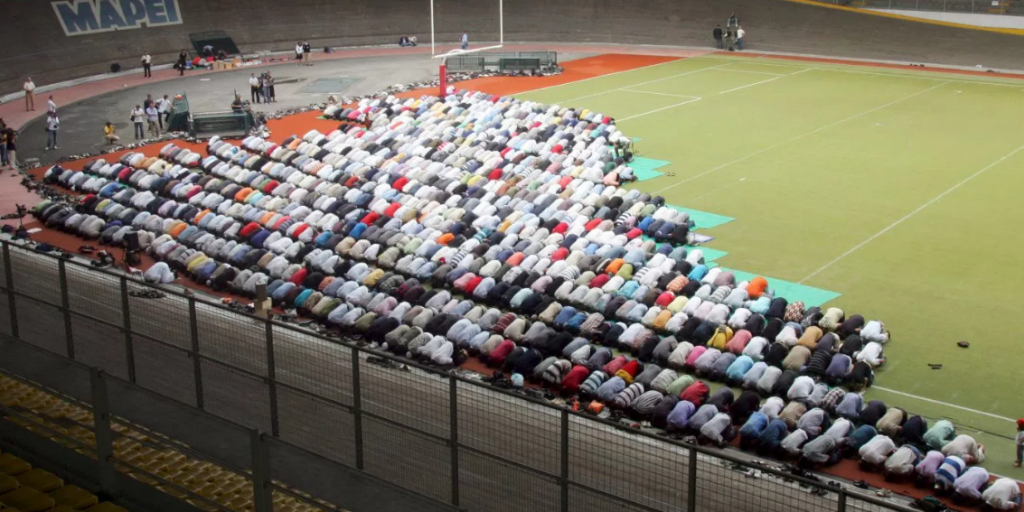 According to Dr. Peter Hammond, when the Muslim population becomes 5% or greater:

From 5% on, they exercise an inordinate influence in proportion to their percentage of the population. For example, they will push for the introduction of halal (clean by Islamic standards) food, thereby securing food preparation jobs for

Muslims. They will increase pressure on supermarket chains to feature halal on their shelves — along with threats for failure to comply.

Recent killings in Paris as well as the arrival of hundreds of thousands of mostly Muslim refugees in Europe have drawn renewed attention to the continent’s Muslim population. In many European countries, including France, Belgium, Germany, the United Kingdom and the Netherlands, concerns about growing Muslim communities have led to calls for restrictions on immigration. But just how large is Europe’s Muslim population, and how fast is it growing?

Using the Pew Research Center’s most recent population estimates, here are five facts about the size and makeup of the Muslim population in Europe:

4Views of Muslims vary widely across European countries. A Pew Research Center survey conducted this spring in 10 nations found that in eastern and southern Europe, negative views prevailed. However, the majority of respondents in the UK, Germany, France, Sweden and the Netherlands gave Muslims a favorable rating. Views about Muslims are tied to ideology. While 47% of Germans on the political right give Muslims an unfavorable rating, just 17% on the left do so. The gap between left and right is also roughly 30 percentage points in Italy and Greece.