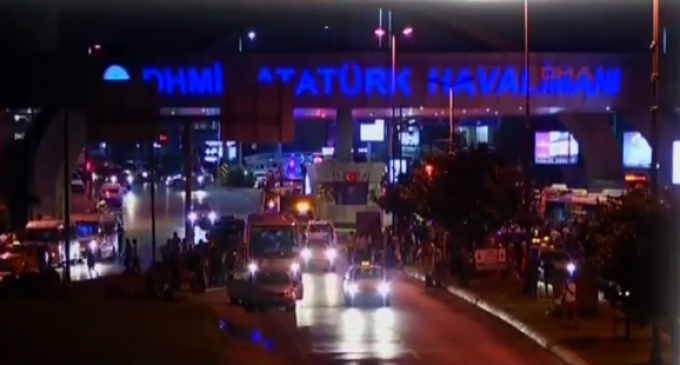 ISIS has claimed responsibility for a suicide gun and bomb attack on the Ataturk international airport in Istanbul that has claimed the lives of at least 28 people and injured 60.

Three attackers were reportedly involved in what appears to be a major co-ordinated assault. Reports indicate that all three attackers have been killed.

— Traveler Joe Durand told CNN from the airport that “Police are not letting anyone in … Hundreds of people are flooding away from airport… People are trying to get away. They're not saying much — just the look on their face is enough, shock, some of them bleeding…”
“People are walking away bleeding, with bandages on their head.”
— Traveler Laurence Cameron described what he saw after he stepped off a plane: “It was just a massive crowd of screaming people. Some were falling over themselves. A poor chap in a wheelchair was just left, and everyone just rushed to the back of the building, and then people ran the other way and no one really seemed to know what was going on,” he told CNN. “Where you normally hail a taxi, that is where the attack happened. The ground is just kind of shredded. There is bloodstains on the floor as well.”
— Turkey's Justice Minister Bekir Bozdag earlier said one attacker “first opened fire with a Kalashnikov then detonated himself” at the airport entrance.
— In total three bombs exploded, the governor told TRT.
— One of them was located just outside a terminal on the pavement, while the other was at the security gate at the entrance to the airport, Bozdag told CNN.
— Authorities said no bombs exploded within airport buildings, according to the minister.
— A video posted to Twitter shows a view from a camera inside an airport terminal. A few dozen people are walking around when a bright flash and fireball erupt in the background.
— A Turkish official told CNN that police fired shots at suspects near the international terminal in an effort to neutralize them.
— Videos posted on social media show travelers sitting on the airport floor. A man shouts, “Get down! Get down!” Someone cries as a gunshot rings out.
Istanbul Ataturk Airport

— There are two main passenger terminals

— The airport is roughly 15 miles from the city

— U.S. Secretary of State John Kerry, referencing the attack in Istanbul, told an audience at the Aspen Ideas Festival on Tuesday, “We are still collecting information and trying to ascertain what happened and who did it.”
— Ataturk Airport is “one of the most secure airports in the world,” CNN senior law enforcement analyst Tom Fuentes says. But the airport has been “very overwhelmed for several decades with terrorism from PKK.”
— The U.S. embassy in Ankara, the Turkish capital, is sending consular officers to the airport to account for any potential U.S. victims. But there are no indications of any American casualties at this point, a senior State Department official told CNN's Elise Labott.
— The attacks happened on a warm summer night at the airport, east of Istanbul, that is the 11th busiest in the world in terms of passenger traffic. CNN's Ali Veshi says it is a modern, sophisticated airport. “There are all of the major European and American boutiques there,” said Velshi, who has traveled through Turkey many times. “… You see people of all shapes and colors, in all sorts of dress. If you want to target the cosmopolitan nature of Istanbul, this is possibly the most cosmopolitan, heavily populated part. You can target tourist areas, but this is the part where the world comes together.”