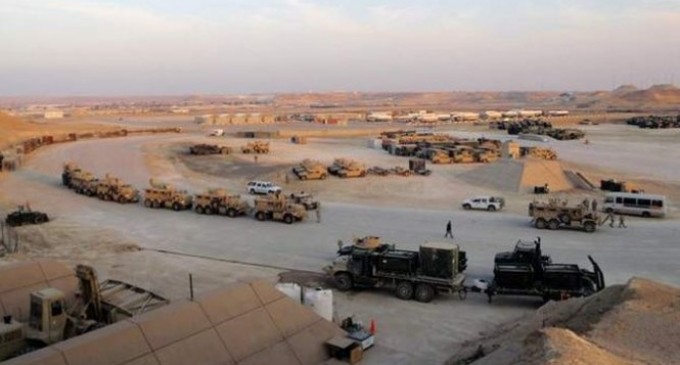 U.S Troops in Iraq had their first battle with ISIS early Monday morning when the militant group tried to attack the Ein al-Asad military base, which holds close to 100 U.S. military advisers.

Reports state that American troops decimated ISIS in a two-hour battle that ultimately forced their retreat.

Soldiers were armed with “light and medium” weapons….and fighter jets, whose air strikes against the the militants “silenced their heavy sources of fire.”

Currently, there are no reports of U.S. casualties.

Looks like ISIS had grandiose ideas about how they would fare against our boys….

The U.S. troops, armed with “light and medium weapons,” and were able to inflict casualties against the ISIS fighters, forcing them to retreat, Shafaq News reported.

“US forces intervened because of ISIS started to come near the base, which they are stationed in so out of self-defense,” said Sheikh Mahmud Nimrawi, a prominent tribal leader.

The incident was the first time that American troops clashed with ISIS forces on the ground in Iraq. For several weeks, the United States has led a series of air strikes against ISIS positions in Iraq and Syria, ones aimed at crippling the militant group’s ability to move about the country and coordinate attacks.

ISIS has responded by calling on members to strike out against American interests in the United States and Canada, and also executing Western hostages. Rebels are now reportedly trying to sell the body of American journalist James Foley for a reported $1 million.

Militants are reportedly offering a DNA sample from Foley’s body to prove its authenticity.

“They ask for $1 million, and they will send DNA to Turkey, but they want the money first. They will not give the DNA without the money,” a former Syrian rebel reportedly told BuzzFeed.

The man claimed to be motivated not by greed or a quest for fame, but by a desire to help the mourning Foley family “find closure,” and deemed his outreach as part of a “humanity case.”

The U.S. forces attacked by ISIS in Iraq were part of a small group that remained in the country to offer support and training to tribal fighters.