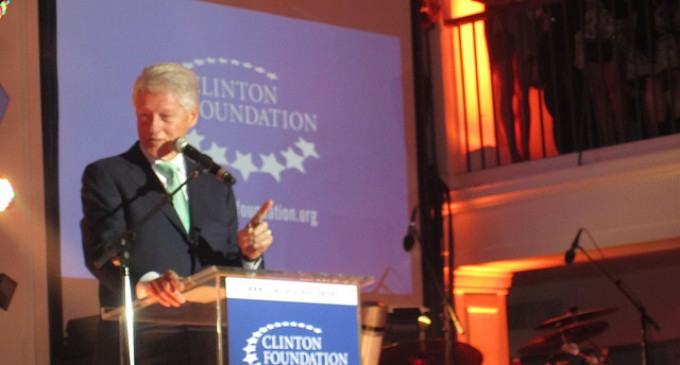 The Clinton Foundation is under IRS investigation in connection with two companies, Uranium One and Laureate Education.  Both companies have paid tens of millions of dollars to the Clinton Foundation and have greatly benefited from the government as a result. The quid pro quo is there, with evidence to prove it, but punishing the Clintons for it may be impossible.

The Canadian company, UrAsia, was purchased by the Russian Atomic Energy Agency, Rosatom,  in January 2005.  The Uranium stakes in this purchase reached from Central Asia to Western America, making Rosatom one of the largest producers of uranium in the world.

The Clinton Foundation received a donation from various leaders of the Canadian mining industry in the excess of  $25 million.  Prior to the deal, Frank Giustra, a “major mining investor in Canada and owner of UrAsia” won an enormous uranium deal with Kazakhstan with the help of Mr. Clinton.

It is reported that Clinton and Giustra took his private jet to Kazakhstan and met with Nursultan A Nazarbayev, the “autocratic president” of Kazakhstan.  Not long after this meeting, UrAsia signed a contract giving them the stake in three uranium mines that were controlled by Kazatomprom, as state-run uranium agency.

The quid pro quo arrived at the Clinton Foundation in the amount of $31.1 million and five months later Mr. Giusta hosted a fundraiser for the “joint Clinton Giusta Sustainable Growth Initiative” where he personally pledged $100 million.

But then there is an instance where the State Department cable traffic rises and there are few if any Clinton corresponding emails. It’s the case of Rosatom, the Russian State Nuclear Agency: Clinton and senior officials at the State Department received dozens of cables on the subject of Rosatom’s activities around the world, including a hair-raising cable about Russian efforts to dominate the uranium market. As secretary of state, Clinton was a central player in a variety of diplomatic initiatives involving Rosatom officials. But strangely, there is only one email that mentions Rosatom in Clinton’s entire collection, an innocuous email about Rosatom’s activities in Ecuador. To put that into perspective, there are more mentions of LeBron James, yoga and NBC’s Saturday Night Live than the Russian Nuclear Agency in Clinton’s emails deemed “official.”

What could explain this lack of emails on the Russian Nuclear Agency? Were Clinton’s aides negligent in passing along unimportant information while ignoring the far more troubling matters concerning Rosatom? Possibly. Or, were emails on this subject deleted as falling into the “personal” category? It is certainly odd that there’s virtually no email traffic on this subject in particular. Remember that a major deal involving Rosatom that was of vital concern to Clinton Foundation donors went down in 2009 and 2010. Rosatom bought a small Canadian uranium company owned by nine investors who were or became major Clinton Foundation donors, sending $145 million in contributions. The Rosatom deal required approval from several departments, including the State Department.