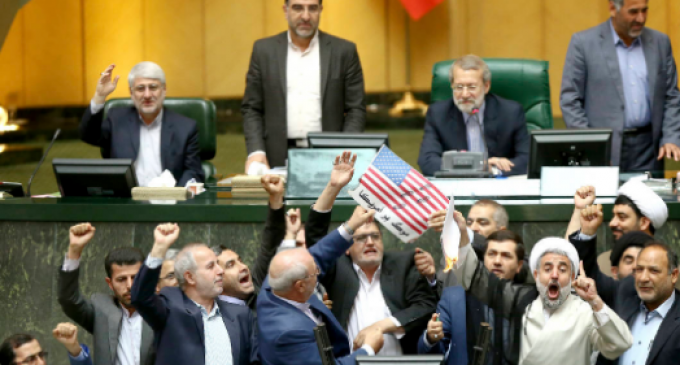 Iranian lawmakers torched a paper US flag on fire and shouted “Death to America!” in parliament on Wednesday in reaction to President Trump pulling out of the nuclear deal.

Even though US flag-burning and “death to America” chants are common occurrences in Iran, it was the first time in recent memory of anything being burned inside the parliament itself.

They also burned a piece of paper representing the nuclear deal even though Iranian President Hassan Rouhani declared that Iran would remain committed to a multinational nuclear deal despite US.

“If we achieve the deal's goals in cooperation with other members of the deal, it will remain in place. … By exiting the deal, America has officially undermined its commitment to an international treaty,” Rouhani said in a televised speech.

“I have ordered the foreign ministry to negotiate with the European countries, China and Russia in coming weeks. If at the end of this short period we conclude that we can fully benefit from the JCPOA with the cooperation of all countries, the deal would remain,” he added.

Turn the page for video and more details: