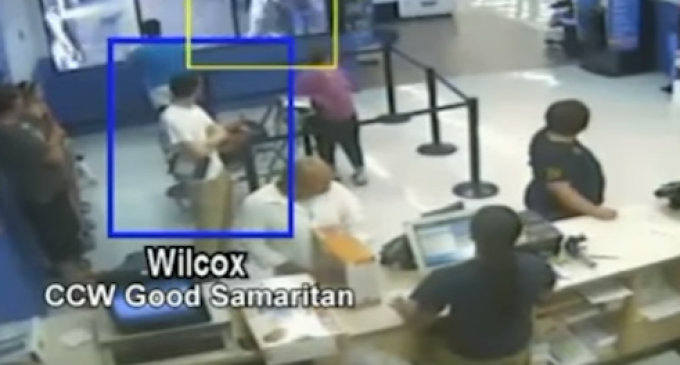 In this particular instructional, out of Las Vegas, Nevada, involves a Walmart mass shooting where two shooters, loaded down with multiple firearms and ammo, entered the retail store in the middle of the day and caused havoc, shouting something about a revolution.  A concealed carry individual, John Wilcox, happened to be near the front of the store near the Customer Service Desk when the first shot into the ceiling rang out.

Wilcox's first reaction was to draw his weapon and begin following the first of the two shooters, unaware that the trailing female was with the first shooter.  The male and female shooters kept a purposeful distance between them so that an optimal amount of casualties could be dealt out before they themselves were neutralized.

The concealed carrier proceeded to follow the lead shooter, again unaware that the second shooter was following, and as he approached the first, the female turned and shot Wilcox in the back, murdering him instantly.

The video has a bit of narration from the detective reviewing the evidence of the shooting and John Correia, the host of the video makes an impassioned plea near the end which I believe warrants special attention.

Part of the reason that this video is a great learning tool is that John Wilcox, who should be applauded for trying to do the right thing and protecting people who are individuals he's never met but feels compelled to shield from the bad guys, commits one fatal mistake and that is not realizing that the lone shooter was not alone.  He failed to notice this because he intervened in the situation without knowing all the variables in place.

You can read the rest of this analysis and watch the video on the following page.