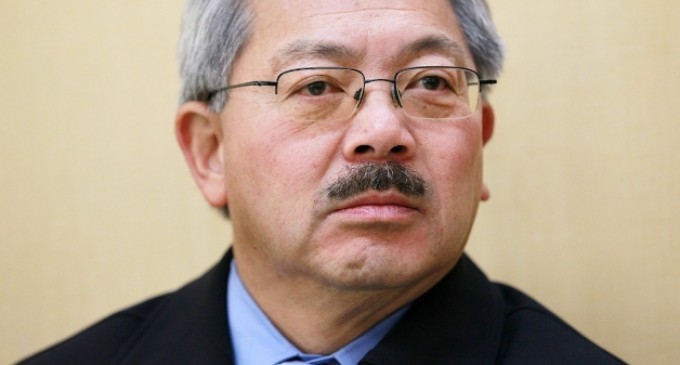 The Mayor of San Fransisco, Ed Lee, is on a big brother power trip, thinking that he has the authority to tell city workers that cannot travel to North Carolina.

City workers were banned by the Lee from “non-essential” travel to North Carolina.

First of all, what is, by definition, “non-essential” travel? And does one have to get a permission slip by Lee for “essential” travel?  Second, by what authority can a mayor ban travel of a private citizen?  Lee is dictator if he believes this is within his purview of power.

Yet, this normalizing of transgender people, represented by approximately 0.2 to 0.3 of the United States population, while forcing 99.7% of the rest of America to their accommodate perceived bathroom needs, is not the proper role of a republic.

The battle lines have been drawn in Washington to do just this with Obamacare forcing both insurance companies, as well as the taxpayer, to pay for the procedures desired by transgenders.

What is politically advantageous for this administration far outweighs what is best for individuals or society as a whole.  Thus, with this view point, every health insurer offering plans through state-run Obamacare or Healthcare.gov now must cover more health procedures that transgenders desires.

In the past, several health insurance plans have categorically excluded health care related to transitioning between genders, often on the grounds that such procedures are often cosmetic, not medically necessary, and elective in nature. Now, such categorical bans will be disallowed, and insurers will have to cover many of the procedures.  It declares that insurers are prohibited from engaging in discrimination not only on the basis of sex, but also on the basis of gender identity, reported Truth and Action.

The left believes forcing people into submission and into their world view is a proper use of governmental power and Mayor Lee in his proclamation demonstrates this megalomania.

Read more about the transgender battle across the nation on the next page.