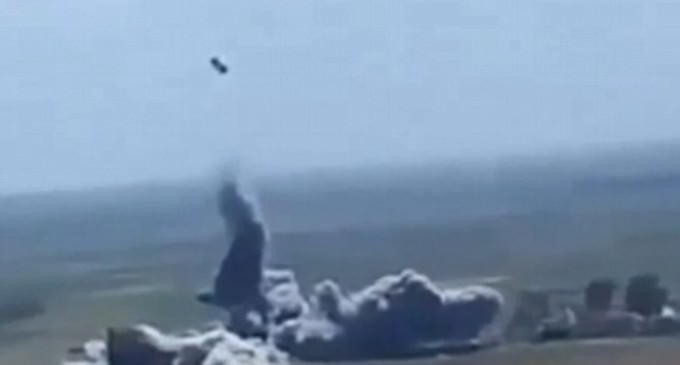 One Jihadist who tried to launch attack on Kurdish Peshmerga forces near Kirkuk, Iraq might not get the 72 virgins he surely anticipated meeting in the afterlife as his failed mission provided the world with an incredible visual instead of dead infidels.

The ISIS suicide bomber appears to have hit a roadside bomb that powerful enough to propel his car well into into the air where it likely detonated from an IED underneath the vehicle.

The video is the latest in a long line of videos filmed and published by Kurdish Peshmerga forces in Iraq in which IS militants are seen attempting, and failing, to launch deadly attacks – being killed in the process.

IS has become notorious for the sophistication and brutality of its own video productions, which often include beheadings and mass executions. Unlike most previous forms of propaganda, which portrays the enemy as brutal thugs, IS videos appear to revel in highlighting their own brutality.

Now the Kurds appear to have fought back in the propaganda stakes as well as on the battlefield in a bid to show IS are anything but the invincible Jihadists they claim to be. Other recent videos released by the Kurds have showed cars andarmoured trucks exploding as they are hit by tank shells and men in suicide vests being shot dead as they charged.

It's impossible to tell from the videos whether IS or the Kurds are winning the battle for territory in Iraq and Syria: what becomes clear from the videos is how brutal the war actually is, the depths of hatred for one another so graphically laid bare for internet users around the world to watch, enjoy and gloat over.